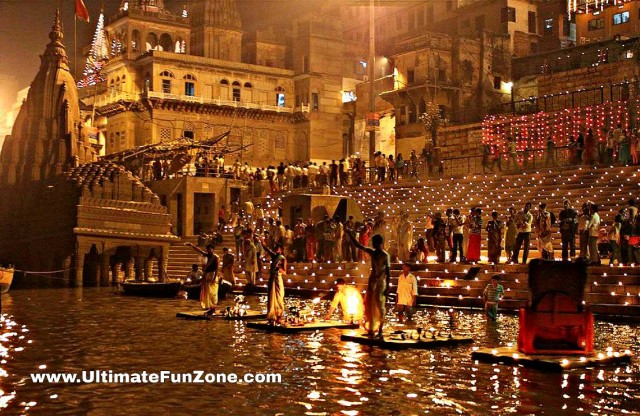 This story is of Dwaparyuga when Lord Krishna's Sudarshan Chakra burnt Kashi to ashes. Later it became famous as Varanasi. This story is as follows:

King Jarasandha of Magadha was very powerful and cruel. He had countless soldiers and divine weapons. This was the reason that all the kings around had a sense of friendship towards him. Jarasandha had two daughters named Asti and Prasati. They were married to King Kansa of Mathura.

Kansa was a very sinful and wicked king. Lord Krishna killed him to save the people from his atrocities. Jarasandha got angry after hearing the news of son-in-law's death. Burning in the flame of vengeance, Jarasandha invaded Mathura several times. But each time Shri Krishna defeated him and left him alive.

After Kashiraj, his son became Kashiraj and decided to take revenge on Krishna. He knew the power of Shri Krishna. Therefore, he pleased Lord Shiva by doing hard penance and asked for a boon to end them. Lord Shiva requested him to ask for some other boon. But he stood firm on his demand.

Then Shiva created a terrible masterpiece Kritya with mantras and while giving it to him said, “Watts! You will order it to go in the direction it will burn the state located in that direction to ashes. But take care, do not use it on a Brahmin devotee. Otherwise, its effect will be fruitless.” Saying this, Lord Shiva become disappears.

Here, after killing the evil Kalayavan, Shri Krishna came to Dwarka with all the Mathura people. Kashiraja sent Kritya towards Dwarika to kill Shri Krishna. Kashiraj did not know that Lord Krishna is a Brahmin devotee. So even after reaching Dwarka, Kritya could not harm them. On the contrary, Shri Krishna turned his Sudarshan Chakra towards it. Sudarshan went towards Kritya with a fierce fire. Kritya, frightened after seeing life in distress, ran towards Kashi.

Sudarshan Chakra also started following it. Upon reaching Kashi, Sudarshan consumed the act. But still its anger did not calm down and it ruined Kashi.

In due course of time, the town was re-established between two rivers named Vara and Asi. The city was named Varanasi due to its location between the rivers Vara and Asi. Thus, Kashi was reborn as Varanasi.
Share This Page On...
Home → Fun Zone → Stories → Mythological → Story Of Varanasi