Story Of The Dhruva Star 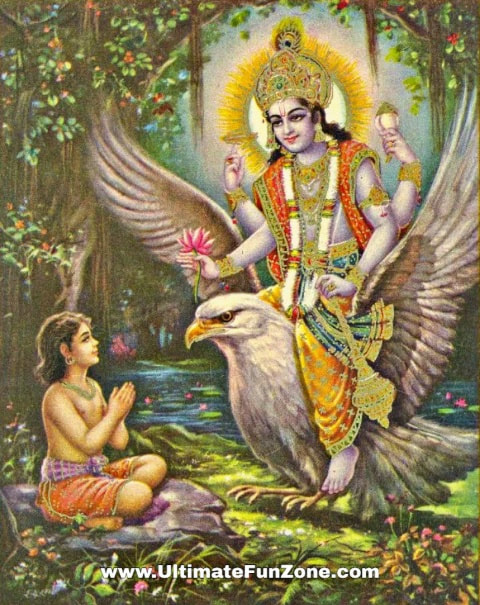 King Uttanapada was the son of Swayambhu Manu, the psyche son of Brahmaji. He had two wives named Suniti and Suruchi. He received sons named Dhruv from Suniti and Uttam from Suruchi. They loved both princes equally.

Although Suniti considered Dhruv as well as Uttam as her son, Queen Suruchi was jealous and hated Dhruva and Suniti. She was always looking for opportunities to humiliate them.

Once Uttanpad was in love with Uttam in his lap. Then Dhruva also came there. Seeing Uttam sitting on his father's lap, he too sat on his lap. This thing did not suit Suruchi. He pulled down Dhruv from his father's lap and uttered bitter words. Dhruva went to his mother Suniti, with crying and told her everything.

She told him explaining, “Son! Even if someone insults you, but never in your mind desire for others. A person who gives grief to others, has to bear his own fruit. Son! If you want to sit in the father's lap, then worship Lord Vishnu and please him. It was only by his grace that your grandfather Swayambhu Manu attained salvation after suffering rare cosmic and supernatural pleasures. So, son. You too should worship them. Only they can overcome your sorrows.”

Listening to Suniti, Dhruva got into the mind of devotion and reverence towards Srivishnu. He left home and started towards the forest. By the grace of Lord Vishnu, he saw Devarshi Narada in the forest. He told Dhruva the method of worshiping Lord Vishnu.

Dhruva took a bath in the water of Yamuna and remained devoted and worshiped Lord Vishnu with a concentrated heart. After five months, he balanced on a toe and started doing austerities.

Gradually his light increased rapidly. All three people became shaky due to his tenacity. When the earth started to crush under the weight of his thumb, Lord Vishnu appeared in front of the devotee Dhruva and asked his wish.

Dhruva said, “God! When my mother Suruchi had taken me out of her father's lap by saying derogatory words, then at the behest of Mother Suniti, I decided in my own mind that the divine God Shri Vishnu is the father of this whole world, for whom all beings are equal, now I will only sit on his lap. Therefore, if you want to give me a happy gift, then give me a place in your lap so that no one can take me away from that place. I only have so much desire.”

Shri Vishnu said, “Son! You have done such hard tenacity only to get my affection! Therefore, being happy with your selfless devotion, I will give you a place which till date could not achieve. This universe is my part and the sky is my lap. I give you space in my lap. From today onwards, you will be established as a star named Dhruva and illumined the universe.”

Next Shri Vishnu said, “Your position will be bigger than the Saptarshi and they will always revolve around you. As long as this universe remains, no one can remove you from this place. Son! Now you return home. After some time your father will hand over the kingdom to you and go into the forest. After thirty-six thousand years enduring a righteous kingdom on earth, you will finally come to me after.”

Saying this, Lord Vishnu disappear. Thus, the child Dhruva became immortal in the world by pleasing Lord Vishnu with his devotion.
Share This Page On...
Home → Fun Zone → Stories → Mythological → Story Of The Dhruva Star