Story Of Dushyant And Shakuntala 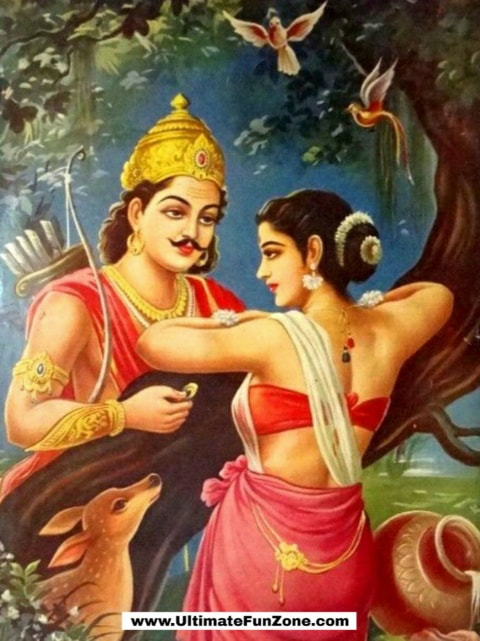 Once Hastinapur King Dushyant went to play hunting game to forest. The forest where he went for hunting was the ashram of Kanva Rishi. Maharaj Dushyant reached into his ashram to see Kanva Rishi. On the call, a very beautiful girl came from the ashram and said, “O Rajan! Maharishi has gone on a pilgrimage, but you are welcome in this ashram.” Seeing the girl, Maharaj Dushyant asked, “Balike! Who are you?” The girl replied, “My name is Shakuntala, and I am the daughter of Kanva Rishi.” Hearing that girl, Maharaja Dushyant asked in surprise, “Maharishi is a born Brahmachari then how are you his daughter?” Responding to his question, Shakuntala declared, “Actually my parents are Maneka and Vishwamitra. My mother left me in the forest when I was born, where a bird named Shakunta protected me. That's why my name is Shakuntala. After that, the eyes of Kanva Rishi fell upon me, and he brought me to his ashram. He was the one who fed me. The one who gives birth, the one who parenting carefully and the one who gives the food - these three are called as father. In such way Kanva Rishi became my father.”

Hearing Shakuntala's words, Maharaja Dushyant said, “Shakuntale! You are a Kshatriya girl. Seeing your beauty, I have offered my heart to you. If you have no objection, I want to marry you.” Shakuntala was also fascinated with Maharaja Dushyant, so he gave her approval. Both got married to Gandharva. Maharaja Dushyant spent some time in the forest, while staying with Shakuntala. Then one day he said to Shakuntala, “Dear! I have to leave Hastinapur to see my kingdom work now. When Maharishi Kanva returns from pilgrimage, I will take you away from here and take you to my royal palace.” Saying so, the king gave Shakuntala his gold ring as a token of his love and went to Hastinapur.

One day Durvasa Rishi came to his ashram. Shakuntala did not even know about his arrival due to being in memory of farewell of Maharaja Dushyant and did not welcome Durvasa Rishi properly. The sage Durvasa feel it as an insult and said in anger, “Balike! I curse you that anyone who has taken care of you and humiliated me, will forget you.” Hearing the curse of Durvasa Rishi, Shakuntala's attention was broken, and she fell at his feet and started praying for forgiveness. By Shakuntala's pardon prayer, the Durvasa sage said, “If you have a love sign of him, and when he will see that sign, and he remembered all about you.”

Shakuntala became pregnant due to Maharaj Dushyant's cohabitation. After some time Kanva Rishi returned from pilgrimage then Shakuntala told him about his Gandharva marriage with Maharaj Dushyant. On this Maharishi Kanva said, “Daughter! It is not proper for a married girl to stay in the father's house. Now your husband's house is your house.” After saying this, Maharishi sent Shakuntala with his disciples to Hastinapur. While walking in a lake on the way, the ring of Shakuntala given by King Dushyant, which was a love symbol, fell in the lake itself. A fish swallowed that ring.

Upon reaching the King Dushyant, the disciples of Kanva Rishi stood Shakuntala in front of him and said, “Maharaj, Shakuntala is your wife, you accept her.” Maharaja had forgotten Shakuntala due to the curse of Durvasa Rishi. Therefore, he did not accept Shakuntala and started blaming them. As soon as Shakuntala was insulted, lightning flashed in the sky and her mother Maneka took her away in front of everyone.

The fish, which swallowed Shakuntala's ring, got caught in a fisherman's net one day. When the fisherman bit him, a ring came out of his stomach. The fisherman sent the ring to Maharaja Dushyant as an offering. On seeing the ring, Maharaja remembered Shakuntala and repented of his act. Maharaj found Shakuntala very much but did not find her.

After a few days, after receiving the invitation of Devraj Indra, Maharaj Dushyant went to Indravati's city Amravati to help him in the Devasur war. After conquering the war, when he was returning to Hastinapur by sky route, he saw the ashram of Rishi Kashyap on the way. They stayed there for their visit. In the ashram, a handsome boy was playing with a fierce lion. Maneka had left Shakuntala with the sage Kashyapa and that child was the son of Shakuntala. Seeing that child, a feeling of love rose in the heart of Maharaj. When he proceeded to lift him in the lap, Shakuntala's friend shouted, “Oh gentleman! Don't touch this child, otherwise a black rope tied in his arm will bite you by becoming a snake.” Even after hearing this, Dushyant could not stop himself and lifted the child in his lap. Now her friend saw with surprise that the black rope tied in the child's arm has fallen on the earth. She knew that whenever his father would take the child in his lap, the black rope would fall to the earth. She was happy and narrated the entire story to Shakuntala. Shakuntala came to Maharaj Dushyant. Maharaj recognized Shakuntala. He prayed forgiveness to Shakuntala for his act and took the permission of Rishi Kashyapa and brought her along with their son to Hastinapur.