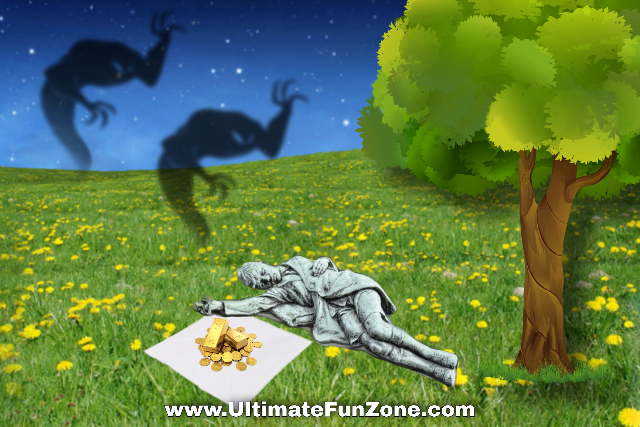 There lived a weaver named Somilak in a town. Even after making a variety of colorful and beautiful clothes, he never got more money than just food and clothes. Other weavers became rich by weaving coarse cloth. Seeing them one day, Somlik said to his wife: “Dear! Look, even the weavers who weave modest cloth have amassed so much wealth and wealth, and I am still poor to this day, making such beautiful, exquisite clothes. It seems This place is not lucky for me, so I will go abroad and earn money.”

Somilak's wife said: “Dear! The imagination of earning money abroad is no more than a false dream. If you want to get money, then it happens in your home country. If it doesn't happen, the money in your palm is also destroyed. Keep doing business, if it is written in fate, then money will rain here.”

Somilak: “Luck-unfortunate talk is spoken by cowardly people. Laxmi is attained only by the industrialist and the man of effort. The lion also has to venture for his food. I will also venture; Go abroad to accumulate wealth. I'll try.”

Saying this, Somilak went to Vardhamanpur. There in three years, with his skill, he walked towards the house with 300 gold seals. The road was long. Halfway through the day, it was evening. There was no house nearby. He spent the night climbing on the branch of a thick tree. He had a dream while sleeping that two men of terrible shape were talking among themselves. One said: “O man! What do you not know that Somilak cannot have more money than food and clothes; then why did you give him 300 seals?” The other said: “O fate! I will give the fruit of every effort to every man once. It is up to you to let him stay with him or not.”

After the dream, Somilak woke up and saw that the bag of seals was empty. Somilak was deeply saddened by the loss of wealth accumulated by so many sufferings, and began to think: “Which face will I show my wife? What will my friend say?” Thinking of this, he again returned to Vardhmanpur. There he worked hard day and night and collected 500 seals in a year. He was going towards the house with them when it was night halfway through. This time he did not stay to sleep; It went on.

But as he went on, he again heard the two “man and destiny” talking as before. Fate again said the same thing: “O man! Don't you know that Somilak cannot have more money than food and clothes? Then, why did you give him 500 seals?” The man replied the same: “O fate! I will give the fruit of every businessman once, beyond that it is up to you whether to keep him or take it away.” After this conversation, when Somilak saw the bag containing his seals, it was empty of seals. In this way, Somilak's heart felt very sad after being empty-handed twice. He thought: “Death is better than this moneyless life. Today, I tie a rope to the branch of this tree and hang on it and give my life here.”

Tie a noose around his neck, tied him to a twig. When he was about to hang, he heard “Saumilak! Do not dare like this. I have stolen your money. In your destiny, you will consume more money than just food and clothes.” Not written. Don't waste your powers in vain accumulation of money. Go home and live happily. I am happy with your courage; If you want, ask for a boon. I will fulfill your wish.”

Somilak said: “Give me abundant wealth in boon.”

The unseen deity replied: “What is the use of wealth? It is not used in your destiny. What will you do with money that is not enjoyed?”

Somilak, who was hungry for wealth, said: “Whether it is enjoyment or not, I want money. There is great glory in wealth, even without use or consumption. In the world, only the one who has the accumulation of wealth is considered to be worshiped. Miserable and The illiterate also get respect in the society.

After listening to Somilak the deity said; “If this is the case, the desire for money is so strong, then you go to Vardhmanpur again. There are sons of two banias; one secret wealth, the other the money used. Knowing the nature of these two types of wealth, you ask for the boon of anyone. If you want money without the ability to consume, I will give you secret money and if you want money for spending, I will give the used money.” Saying this, the deity disappeared.

Somilak again reached Vardhamanpur as per his orders. It was evening. Inquiringly, he went to secret wealth's house. No one at home welcomed him. On the contrary, by calling him good or bad, secret wealth and his wife tried to push him out of the house. But Somilak was also firm in his resolve. Despite being against everyone, he entered the house and sat down. During the meal, secret wealth gave him dry roti. After eating it, he slept there. In the dream, he again saw the same two gods. They were talking. One was saying: “O man! Why did you give so much more money to secret wealth than destiny that he also gave bread to Somilak.” The man replied: “It is not my fault in this. I have to get the dharma performed at the hands of a man, it is under you to give the fruits of that.” On the second day, secret wealth became ill with dysentery and had to fast. In this way he was compensated.

Somilak went to the house of the spent money the next morning. There he welcomed him with food. He also gave a beautiful bed to sleep in. While sleeping, he heard again; The same gods were talking. One was saying: “O man! He has spent a lot of money on the hospitality of Somilak. How will it be compensated now?”

The other said: “O fortune! It was my duty to spend money for hospitality, it is under you to pay its fruit.”

In the morning, Somilak saw that a royal man from the royal court was bringing a gift of money in the form of a royal prasad and giving it to the money used.