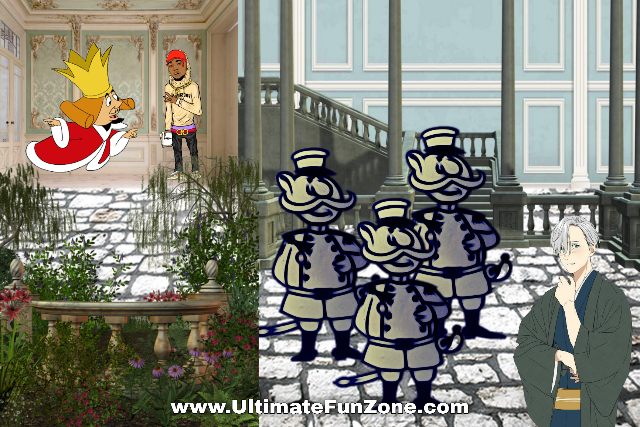 A very skilled businessman Dantil lived in the city called Vardhaman. The king was aware of his abilities, which made him the administrator of the kingdom. With his efficient methods, the merchant Dantil kept the king and the common man very happy. After some time, the merchant Dantil decided to marry his daughter. On this occasion he organized a huge banquet. In this banquet, he invited everyone from the royal family to common man. A servant of the royal family, who used to sweep the palace, also attended the feast. But he accidentally sat in a chair that was kept for the royal family only. Seeing the servant sitting in that chair, the businessman gets angry, and he aborts the servant and drives him away. The servant feels great embarrassment and vows to teach the businessman Dantil a lesson.

The very next day the servant is sweeping the king's room. He begins to rave upon seeing the king in half sleep. He speaks, “This business Dantil should misbehave with the queen so much.” Upon hearing this, the king wakes up, and he asks the servant, “Is this really true? Have you seen the merchant Dantil misbehaving?” The servant immediately catches the king's feet and says, “Forgive me, I was not able to sleep last night. Nothing was mumbling as I was not getting enough sleep.” Hearing this, the king does not speak anything to the servant, but doubts arise in his mind.

From that day onwards, the king prohibits uncontrolled roaming in the palace of the merchant Dantil and reduces his authority. The next day, when the businessman Dantil's come the palace, he is stopped by guards. Seeing this, the business Dantil is very surprised. That is when the servant standing there speaks with amusement, “Hey guards, don't know who these are? These are very influential people who can throw you out as well. Just like they did with me at my dinner. A little careful.”

On hearing this, the businessman Dantil understands the whole scene. He apologizes to the servant and calls the servant to eat at his house. The businessman is very devoted to the servant. He then humbly apologizes for the humiliation done on the day of the feast and says that whatever he did, he did wrong. Servant assure him “Don't you worry, I will definitely bring back your lost honor from the king.”

The next day the servant sweeps into the king's chamber again, muttering, “Oh my God, our king is so stupid that he eats cucumbers in the bathroom.” Hearing this, the king gets angry and says, “Fool, your Dare this? If you had not been a servant of my room, you would have fired me.” The servant then falls at the king's feet and vows to never murmur again.

The king also thinks that when he can speak so many wrong things about me, then he must also have spoken wrong about the businessman. The king thinks that he punished the merchant Dantil in vain. The very next day, the king returns his lost reputation to the merchant Dantil in the palace.
“Lesson: Whether a person is big or small, we should treat everyone in the same manner.”
Hearing this story from Damanak, Sanjeevak said, “All right. I will do what you say.”

Pinglak kept his right hand above the Sanjeevak bull and asked, “Where have you come from in this forest? Do you live here efficiently?”

Sanjeevak narrated his entire story to him.

Pinglak listening to his story told him that you fearlessly roam in this forest protected by me. After this, Pinglak handed over the revenue of his forest to new ministers Kartak and Damanak and lived happily with Sanjeevak himself.

Sanjeevak released the violent habits of wild Pinglak in a few days and after applying it to the rural religion, by the influence of his intelligence Pinglak also became interested in his words. His instinct of violence came to an end. He no longer allowed stag and other animals to come near him. He kept Kartak and Damanak away.

The result was that the small animals that fed their stomachs were fed up with hunger due to the food left over from the lion's prey. Kartak, Damanak and other animals began to worry about this situation. They started thinking that when the snake wrapped in Lord Shankar's neck wants to swallow Ganeshji's vehicle rat, when Karthikeya's vehicle wants to eat the peacock Shankarji's snake, when the peacock that eats the snake also eaten by Parvati's vehicle lion, then why this drama of non-violence?

Damanak said to Kartak, “Hey brother, now Pinglak and Sanjeevak have become such a close friend that Pinglak has turned away from us. Many of our companions also fled. We should convince the king. The minister's religion is to explain it to the king at the right time.”

Kartak said, “You have set this fire. You have made this grass-fed animal our friend's friend.”

Damanak said, “It is true. My fault is mine, not Pinglak's. But like I had made her friendships, I will also dissolve their friendship.”

Kartak said, “But Sanjeevak is a very intelligent creature even when he is a bull. On the other hand, lion Pinglak is also terrible. It is fine that your intellect is sharp, yet how will you be able to separate these two now?”

Damanak said, “Brother! I am capable despite being unable. Even the smart person can complete the work which is not completed by might. As the crow had finished the poisonous black snake with the help of the gold thread!”

Kartak asked, “How did that happen?”