PANCHaTANTRA:
​The Legend of The Beginning - Mitrabhed 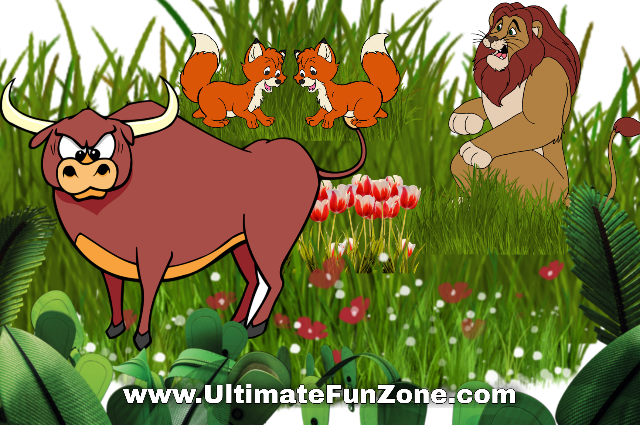 In the city of Mahilaropya, there was a vanyk-son named Vardhman. He had created enough wealth in the business in a religious manner; But there was not as much satisfaction; There was a desire to earn even more money. Money is earned only through six measures - education, rajseva, farming, lore, interest and trade. Of these, the means of trade are the best. There are also many types of business. The best of them is to collect the best items from the outer place and sell them in their homeland. That is what the Vardhman resolved to go from his city to outer place. He prepared his chariot for the route going to Mathura. Two beautiful, strong bulls were built in the chariot. His names were Sanjeevak and Nandak.

When the chariot of the Vardhman reached the banks of the Yamuna, the bull named Sanjeevak was trapped in the swamp of the river bank. One of his legs was also broken in an attempt to get out of there. Vardhman was very sad to see this. Three nights he waited for the bull to be healthy. Later, his sarthi said that “there are many violent animals living in this forest.” There is no way to protect them here. It will take a lot of days for the Sanjeevak to be good. The crisis of life cannot be raised by staying here so many days. Why do you put your life in the face of death for this bull?”

The Vardhman then proceeded to guard the Sanjeevak by placing the protector. When the defenders also saw that the forest was full of many lions and tigers, they also fled two or a day later and lied before the Vardhman, “Swami! Sanjeevak then died. We cremated him. The Vardhman was grieved to hear this, but there was no remedy now.”

Here, the Sanjeevak at yamuna-coast feel somewhat healthier due to fresh air. The front of the side of the river is very powerful for animals. After his continuous meal, he became very fleshy and heart-reinforcing. Throughout the day, it was his job to bridge the banks of the river with horns and to play horns in the bushes of the thundering edges.

One day, on the same Yamuna coast, the lion named Pinglak came drinking water. There he heard the serious roar of the Sanjeevak from afar. He was frightened and hid in the bushes.

There were two jackals with the lion - Kartak and Damanak. Both of them were always behind the lion. He drowned in surprise when he saw his master fearful. It was really a great surprise for the king of the forest to be so fearfull. To date, Pinglak had never been intimidated like this. Damanak told his fellow jackals: “Kartak! Our Master is the King of The Forest. All animals are afraid of him. Today, he is sitting in a bit of a scar like this. Even thirsty, he returned from the Yamuna coast to drink water; What is the reason for this fear?”

Kartak replied: “Damanak! Whatever the reason, what do we do? It is not right to interfere in the work of others. Whoever does this dies in a yearning way, like that monkey the one who intervened in the work of another.”

Damak asked: “What did you say?”