Panchatantra:
​The Elephant And The Clever Rabbit 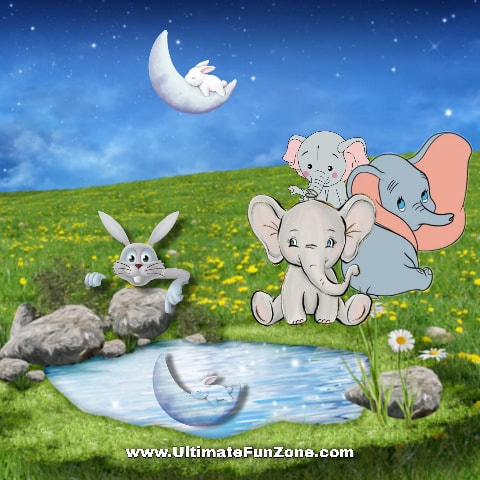 There was a colossal elephant in the forest whose name was Chaturdanta. He was the most important member of his ivory. As a result of the drought that lasted for a number of years, all the lakes, ponds, and pools in that area dried up, and the trees died. The herd of elephants reported to their leader, Gajraj Chaturdanta, that their offspring had passed away as a result of starvation and dehydration. Those who are still alive are also going to perish. This is the reason a large pond has to be found as soon as possible.

After a considerable amount of time spent contemplating the matter, Chaturdanta stated, “I have recalled a pond. It is continually supplied with water from Patalgalaga. Come on, let's go to that place,” All the elephants made it there after an arduous voyage that lasted for five nights. The pond did, in fact, contain some water. A herd of elephants emerged from the lake in the late afternoon, having spent the whole day frolicking in the water. Around the perimeter of the pond, there were a plethora of rabbit burrows. Those bills carried out a survey of the land. The elephants' feet tore all of those banknotes to shreds as they walked over them. A significant number of rabbits were trampled to death by the feet of elephants. Someone's neck was broken, someone's leg was broken. Many more also perished.

After the elephants had left, the rabbits who lived in those burrows got together for a conference. Many of them were injured, and their fur was smeared with blood. In it, regret was expressed in the memory of the bunnies that had passed away, and a solution was conceived of for problems that may arise in the future.

They reasoned that because there was no other source of water in the area, these elephants would now have no choice but to come to this pond on a daily basis and step on their burrows. Within two to four days, all the rabbits will be exterminated using this method. It is said that the fragrance of a serpent, the laughter of a monarch, and the honor of Manini are all just as terrifying as the touch of an elephant.

When someone was trying to come up with a plan to get them through this predicament, one of them said, “We should immediately leave this place and move to another nation.” This act of desertion is the most prudent course of action. One to be kept for the family, one for the family to give to the community, and one for the village.” You should go through with it even if it means forfeiting the entire planet and the entire metropolis for the sake of your own safety.

On the other hand, the other rabbits stated that they would not abandon their ancestral homeland.

Some people proposed that a remedy to the problem would be to dispatch a shrewd messenger on behalf of the rabbits to the retinue of elephants. He explains to her that the bunny that is now perched on the moon has forbidden the elephants to visit this pond in any capacity. It is conceivable that he will agree with what the rabbit with the full moon on its head has to say.

After a great deal of deliberation, a rabbit by the name of Lambakarna was dispatched to the elephants in the role of a messenger. On the way to the pond, Lambakarna also perched on a hill, and when the herd of elephants approached, he remarked, “This pond is the moon's own pond. Do not enter this pond.

“I am the rabbit who lives on the moon,” said Lambakarna. Lord Moon has charged me with requesting that you stay away from this pond.

In the midst of this conversation, Gajraj said, “Where is the Lord Moon, whose word you have brought?”

“At the moment, he is located in the pond,” said Lambakarna. Yesterday, you were responsible for destroying the bunnies' burrows. Today, he has arrived here after being informed of the request that was made by the bunnies. It was at his request that I come to you.

“If that is the case, then please show them to me,” Gajraj said. “After I have paid my respects to them, I shall return.”

Gajraj was brought to the edge of the pond by Lambakarna on his own. Moonlight was reflecting off the surface of the water in the pond. Gajraj showed respect by bowing to him as if he were the moon, and then he went back. Following the events of that day, the herd of elephants never again approached the edge of the pond.
Share This Page On...
Home → Fun Zone → Stories → Panchatantra → Sandhigraha/Kakolukiyam → Panchatantra: The Elephant And The Clever Rabbit