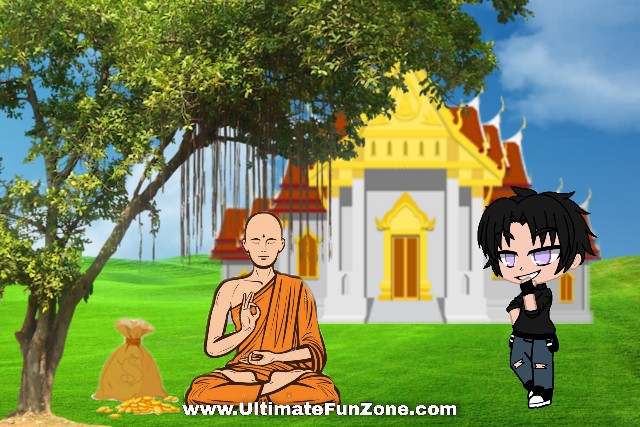 Once upon a time, there used to be a distinguished monk named Dev Sharma in a village temple. Everyone in the village respected him. He used to get various clothes, gifts, food items and money from his devotees in charity. The monk had accumulated a lot of money by selling those clothes.

The monk never believed in anyone and was always concerned about the safety of his wealth. He kept his money in a bundle and always carried it with him.

A liar man lived in the same village. He had been eyeing the money of the monk for a long time. That liar man always followed the monk, but the monk never let the bundle separate from him.

Eventually, the liar man disguised a student and went to the monk. He begged the monk to make him his disciple because he wanted to gain knowledge. The monk got ready and thus he stayed in the temple along with the thug monk.

The liar man did all the other things, from cleaning the temple and the thug served the monk a lot and soon became his confidant.

One day the monk was invited to a nearby village for a ritual, the monk accepted that invitation and on a certain day the monk set out with his disciple to participate in the ritual.

On the way there was a river and the monk expressed his desire to bathe. He placed the bundle of money in a blanket and placed it on the bank of the river. He asked the liar man to guard the goods and went to bathe himself. The liar man had been waiting for this moment since. As soon as the monk went to take a dip in the river, he run away with the bundle of money.
“Lesson: One should not believe a stranger by coming to the smooth talk.”
Share This Page On...
Home → Fun Zone → Stories → Panchatantra → Mitrabhed → Panchatantra: Silly Monk And Liar Man