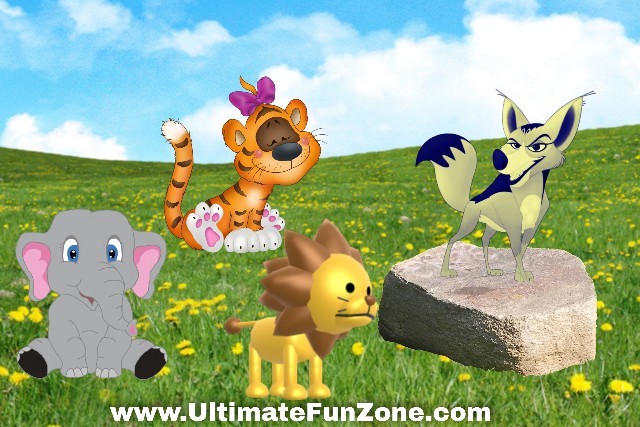 Once upon a time, a jackal was standing under an old tree in the forest. The entire tree fell due to the strong gust of wind. The jackal came in his grip and was badly injured. He somehow dragged and dragged to reach his den.

After several days, he came out of the den. He was feeling hungry. The body had become weak when he saw a rabbit. He jumps up to grab her. The jackal ran some distance and started gasping. Where was the life left in his body? Then he tried to chase a quail. Here too he failed. He did not even dare to chase the deer.

He stood thinking. He was unable to hunt. Understand that the time of starvation has come. What should be done? He started roaming here and there, but no dead animal was found anywhere. While roaming around, he came to a settlement. He thought that maybe some chicken or its baby might get caught. So, he started roaming here and there in the streets.

Then the dogs ran after him barking. The jackal had to run to save his life. Entering the streets, he tried to hide them, but the dogs were familiar with the streets of the town. The group of dogs lying behind the jackal was increasing and the strength of the weak body of the jackal was getting exhausted.

The jackal had come running to the settlement of Rangrej. There he saw a big drum in front of a house. He jumped into the same drum to save his life. In the drum, Rangrej had kept the color solution for dyeing the clothes.

The group of dogs went on barking. The jackal, holding his breath, remained immersed in color. He would stick out his snout only to breathe. When he was sure that there was no longer any danger, he went out. He was drenched in color. On reaching the forest, he saw that the whole color of his body had turned green. Rangrej had kept the green color in that drum. Any wild animal who saw its green color would be frightened. Seeing them trembling with fear, a plan came to the evil mind of the colored jackal.

The colored jackal gave a voice to the running creatures in fear, “Brothers, don't run and listen to me.”

Hearing him, all the running animals stopped.
The colored jackal took advantage of their stuttering and said, “Look-see my color. Is there such a color of any animal on earth? No. No. Understand the meaning. God has sent me this special color and sent it to you. You call all the animals. Bring me then I will tell the message of God.”

His words had a profound effect on everyone. They went and called all the other animals of the forest and brought them. When everyone came, Ranga Jackal climbed on a high stone and said, “Wild creatures, Prajapati Brahma himself made me a creature of this supernatural color with his own hands and said that there is no ruler of animals in the world. You should go and become the king of animals. You have to do welfare. Your name will be Emperor Kakudum. The wild animals of the three worlds will be your subjects. You are no longer orphans. Live fearlessly under my umbrella.”

All the animals were astonished by the strange color of the jackal. His words worked magic. The upper breath of the lion, tiger and cheetah also remained above, and the lower breath remained below. No one dared to cut him off. Suddenly all the animals started rolling at his feet and said in one voice, “O messenger of Brahma, Kakudum, the best among all beings, we accept you as our emperor. We will be very happy to follow the will of the Lord.”

An old elephant said, “O Emperor, now tell us what is our duty?”

Ranga jackal raised his paw like an emperor and said, “You should serve and respect your emperor a lot. He should not have any problem. There should be a royal arrangement for our food and drink.”

The lion bowed its head and said, “Sir, it will be so. Our life will be blessed by serving you.”

That's all, Emperor Kakudum became the royal opulence of the colored jackal. He started living in princely glory.

Many foxes would be engaged in his service, the bear would swing the fan. The animal whose flesh the jackal expressed its desire to eat was sacrificed.

When the jackal went out to roam, the elephant used to raise its trunk and trumpet like a bugle. Two lions would be like commando body guards on either side of him.

The court of Kakudum was also held every day. The red jackal had done a trick that as soon as he became the emperor, he had driven the jackals from that forest by issuing royal orders. He was in danger of being recognized by the creatures of his race.

One day Emperor Kakudum was resting in his royal den after eating and drinking when he woke up seeing the light outside. When I came out, it was a moonlit night. In the nearby forest, groups of jackals were speaking the dialect of “Hoo hoo...”. On hearing that voice, Kakudum lost his cool. His innate nature hit hard, and he also raised his face towards the moon and started chanting “Hoo hoo...” by mixing in the voices of the jackals.

The lion and the tiger saw him doing “Hoo hoo...”. They were startled, the tiger said, “Hey, this is a jackal. He remained the emperor by deceiving us. Kill the lowly.”

Lions and tigers rushed towards him and on seeing him, they stunned him.
“Lesson: The pole of fakeness is exposed sooner or later.”