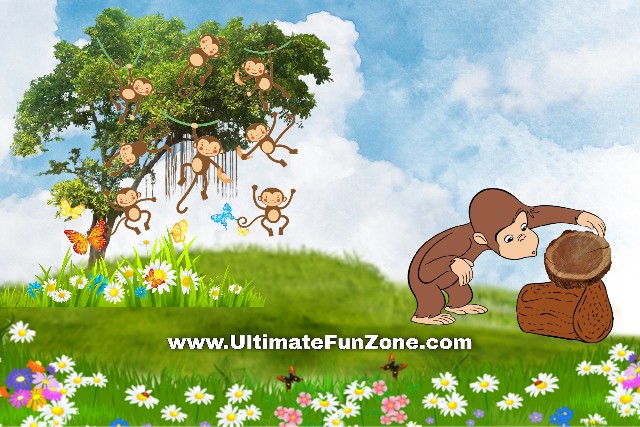 At one time, a temple was being built just a short distance from the city. There was a lot of wood work in the temple, so many wood sawing workers were working. Wood logs were lying here and there, and the work of sawing and piercing was going on. All the workers had to go to the city to have lunch, so there was no one there for an hour in the afternoon. One day when it was time to eat, all the workers quit work and left. One log was left half-cut. The laborers stuck a wooden nail in a half-cradle. By doing this, it is easy to insert saws again.

Then a group of monkeys jumped there. There was also a mischievous monkey among them, who kept on manipulating things meaningfully. It was her habit to screw up. The monkey chieftain ordered everyone not to tamper with the things lying there. All the monkeys walked towards the trees, but that devil monkey left everyone's eyes behind and started to obstruct.

He looked at the half-baked log. Just then, he poured on it and started looking at the nail which was lying in the middle. Then he saw the saw lying nearby. He picked it up and started rubbing it on the wood. When the voice of Kirrrr-Kirrrr started coming out of him, he slapped the saws with anger. In the language of those monkeys, Kirrrr-Kirrrr meaning was the 'nihkhattu'. He again turned to see the nail stuck between the logs.

His mind started getting curious that what would happen if this nail was removed from the middle of the log. Now he grabbed the nail and tried hard to get it out. The wedge stuck between the logs is very tightly clamped between the two legs, as the two logs hold it together like a very strong spring clip.

The monkey started trying very hard to move him. When the nail started moving and sliding, the monkey became happy with his power.

He started shouting a loud and loud noise. Amidst this fun, the monkey's tail came between two logs, which he did not know.

He got excited and struck a loud blow and as the keel pulled out, the two parts of the log joined the clip like a burst and the monkey's tail stuck in the middle. The monkey shouted.

Then the workers returned there. On seeing them, the monkey forced to run away and his tail broke. He ran away with a screaming, broken tail.
After telling the story, Kartak said, “That is why I do not do any work that proves any meaning.” Doing waste work can also kill a person. Hey, even now the hunting that Pinglak brings, we get plenty of food from him. Then what is the use of getting into trouble unnecessarily!”

Damanak said, “So do you live only for food?” This is not right Who does not fill his stomach! It is only right to live, whose life can lead to the lives of many more people. Secondly, despite having power that does not use it and allows it to be destroyed just like that, it also has to be humiliated in the end!”

Kartak said, “But both of us are in love with such a minister.” Then what is the benefit of trying to know all this about the king? In such a situation, to say something to the king will also have to make your laughter fly. One should also use his speech where there is some benefit from his use.”

“Brother, you do not understand well. Staying away from the king, I will lose the right honors too. The one who lives near the king, the king also keeps an eye on him and the person becomes extraordinary only by being near the king.

Kartak asked, “What do you want to do?”

“Our master Pinglak is scared today.” Damanak said, “All his companions are also scared. I want to know the reason for their fear.”

“How do you know they are scared?”

“Lo, it's too hard!” Pinglak's gestures, movements, his conversation, eyes and face make it clear that he is afraid. I will go to him and find out the reason for his fear. Then, using my intelligence, I will remove his fear. In this way, I will regain my mantra by subduing him.”

Kartak still doubted, “You don't know anything about how to serve the king.” In such a situation, how will you control him?”

Damanak said, “I don't know about Rajseva, how can you say this?” As a child, with my father, I have learned everything I heard about Seva Dharma and politics. There is immense gold in this earth; Only knights, scholars and clever servants of the king can get it.

Kartak still could not believe it. He said, “Tell me that you will go to Pinglak and say what?”

“What shall I say from now on! At the time of conversation, one thing leads to another. I will talk the same way as the context comes. I will say what I have to say only after considering it as appropriate and inappropriate. In the lap of the Father I have heard the proverb that the one who says irrelevant things has to bear insult, even if it is Jupiter, the Guru of the Gods.”

Kartak said, “Then remember also that the way the mountains endowed with lions, tigers, and crooked animals like snakes are bad and bad, similarly the kings are also very tough due to the association of cruel and wicked people. They are not happy early and if anyone accidentally does something against the king's will, it does not take them any time to duck like a snake and destroy it.”

Damanak said, “You are right.” The wise man should please the master by doing things according to his wish. With this mantra, he can be tamed.”

Kartak understood that Damanak had determined to meet Pinglak in his heart. He said, “If you have such an idea then definitely go. Just remember one of my things: Be careful at all times when you reach the king. My future is also with you. May your path be happy.”

Pinglak, sitting in the middle of the array for protection, saw Damanak coming towards him from a distance. He told the sentinel at the entrance of the phalanx, “Damanak, son of my former general secretary is coming. Let him enter fearlessly and arrange to sit on the proper posture.”

Damanak reached near Pinglak and greeted him. At the same time, after getting his signal, he sat in another circle nearby.

Lion Pinglak lifted his heavy paw and put it on Damanak's shoulder, showing affection and asked with respect, “Say, Damanak, stay with Kushal?” Today appeared after many days. Where are you coming from?

Damanak said, “What purpose can we have at Maharaj's feet! But according to the times, the kings can also work with the best, medium and half-person. We too have always been servants of the Maharaj. Unfortunately we have not been able to get our position and authority, even where can we leave your service and go. We are a little small and incapable, but any such occasion can come when the Maharaja thinks of taking our service.”

Pinglak was ecstatic at that time. Said, “Leave it to the big or small or the capable, the oppressor.” You are the son of our minister, so whatever you want to say, speak fearlessly.”

Even after getting the subsidy, the cunning oppressor did not think it's right to talk about the king's fear in front of everyone. He requested solitude to speak up.

Pinglak looked at his followers. Considering the desire of the king, the surrounding animals and animals sat away.

Upon being alone, Damnak cleverly manipulated Pinglak's pain. Said, “Swami, you were going to drink water on the banks of the Yamuna, then suddenly you returned thirsty and why are you sitting in the middle of this circle worrying with anxiety like this?”

Singh was hesitant at first to listen to Damanak. Then, relying on the cleverness of the oppressor, he thought it's appropriate to open his secret. Thinking for a moment, he said, “Damn, you are roaring every now and again, are you listening to this too?”

“Just because of this, I am angry. The same roar was happening again and again on the coast.” Seems like a wild animal has arrived in this forest. Whose roar is so terrible, what will it be like! For this reason, I am thinking of leaving this forest and moving elsewhere.”

Damanak said, “But it is not right to leave your kingdom in fear of hearing the word, Maharaj! What is the word or sound? The sound of how many hawks is also very serious, and before leaving the place of their forefathers, one must know what is the reason for the sound. It was a matter of fear, like Gomayu Gidar, who later came to know that there is pole-by-pole in the drum.”