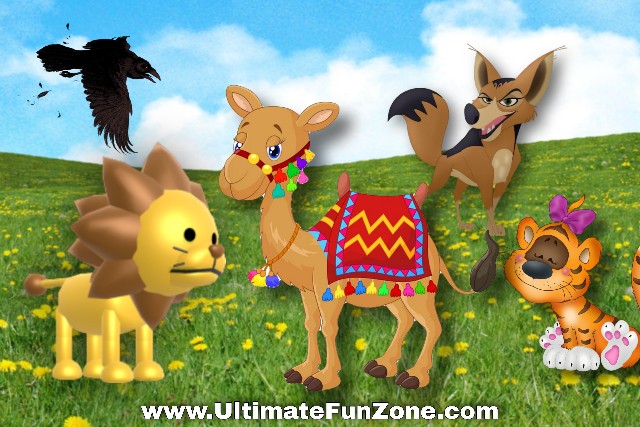 A lion named Madotkat used to live in a forest. The tiger, the crow and the jackal, all three were his servants. One day he saw a camel that had wandered away from his gang and came towards them. Seeing him, lion started saying, “Oh wow! This is a strange animal. After going to find out whether it is a wild animal or a rural animal?”

The crow said on hearing this, “Swami! This camel is a rustic animal and is your food. You kill it and eat it.” Lion said, “I do not kill my visiting guests. It has been said that even the enemy who comes to his house should not be killed by being confident and fearless. So give him a license and bring him here to me so that I can ask the reason for his coming here.”

On getting lion's permission, his followers went to the camel and brought him respectfully to lion. The camel bowed to lion and sat down. When lion asked the reason for his wandering in the forest, he introduced himself and told that he had strayed away from his companions. At the behest of lion, from that day onwards the camel named Kathanak started living with him.

A few days later, Madotkat lion had a fierce battle with a wild elephant. Due to the striking of the elephant's pestle, the lion became half-dead but somehow survived, but he was unable to walk. Due to his incapacitation, the crows, etc., his servants began to starve. Because when the lion was hunting, his servants used to get food from it.

Now the lion was unable to hunt. Seeing their plight, lion said, “Look for such a creature that I can kill you even at this stage and make arrangements for your food.” After getting the permission of the lion, all the animals went around in search of prey everywhere. When nothing was found anywhere, the crow and the jackal consulted together. Jackal said, “Friend crow! What is the benefit of wandering around? Why not kill this kathanak and eat his food?”

The jackal went to lion and after reaching there started saying, “Swami! Together we have scoured the whole forest, but no such animal was found that we could bring near you to kill. Now hunger is so much that it has become difficult for us to walk even a single step. You are sick, If you are commanded, today your food should be arranged only with the meat of the kathanak.” But lion refuses, saying that he has sheltered the camel, so he cannot kill it.

But the jackal somehow convinced the lion. On receiving the king's orders, jackal immediately called his companions. The camel also came with him. Seeing them, lion asked, “Have you got anything?”

The animals including crow, jackal, tiger told that they could not find anything. But in order to satisfy the hunger of his king, all came in front of the lion in turn and pleaded that he kill and eat them. But the jackal would tell some flaw in everyone so that the lion could not kill them.

Finally, came the turn of the camel. The poor camel kathanak, when he saw that all the servants were pleading for their lives, he did not lag behind.

He bowed to lion and said, “Swami! All these are inedible to you. Some are small in size, some have sharp nails, some have thick hair on their body. Today, you should live your life from my own body so that I can attain both the worlds.”

The kathanak had so much to say that tiger and Jackal pounced on him and saw his stomach ripped apart. What was it then, the starving lions and tiger etc. immediately licked it.
“Lesson: Whenever you stay with the rascals, be fully alert, and do not come into their sweet talk at all, and it is better to stay away from the foolish masters.”
Share This Page On...