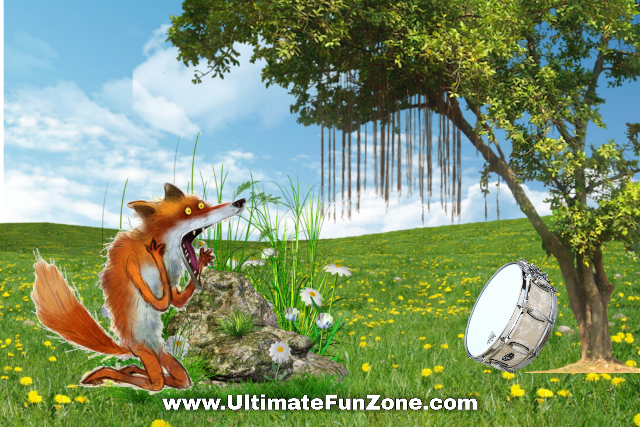 Once near a forest, a fierce battle ensued between two kings. One won and lost the other. The armies returned to their cities. Just then, an army drum was left behind. Bhat and Charan, who played the drum with the army, used to tell stories of valor at night.

After the war, a thunderstorm occurred. In the thrust of the storm, that drum, by drifted and drifted, stood near a dry tree. The dry twigs of that tree were soaked with the drum in such a way that the strong wind hit the drum and there was a resonant sound of the drum.

A jackal used to roam that area. He heard the sound of drums. He was very scared. Furthermore, he had heard no animal before uttering such a strange voice. Not only that, but he began to think what kind of animal is this, who speaks such a loud speech 'Dhammadham'. The jackal would hide and look at the drum, to know whether this creature is about to fly or to run on four legs.

One day, the jackal hid behind the bush and monitored the drum. Then a squirrel jumping down from the tree jumped on the drum. There was also the sound of lightning. The squirrel kept munching while sitting on the drum.

Jackal muttered, “Oh! So this is not a violent creature. I should not be afraid either.”

The jackal blew and went near the drum. Sniffed him. He did not see the head of the drum, nor his feet. Then the twigs collided with the drum with a gust of wind. Dham sounded, and the jackal jumped up and fell back.

As soon as he entered his den, the jackal said, “Oh dear! Get ready to eat the feast. I have come to find a big prey.”

Female jackal started asking, “Why didn't you bring him to death?”

The jackal rebuked him, “Because I am not as foolish as you. He is hidden inside a shell. The shell is such that it has dry skin doors on two sides. If I tried to hold him by putting my hand on one side, he would don't run away from the other door?”

When the moon came out, both went towards the drum. While they were approaching, the wind then hit the twigs on the drum and the sound of drumming came out. Jackal said in the female jackal's ear, “Heard his voice? Just think whose voice is so deep, how thick he himself will be.”

Straighten both the drum and sit on either side of it and tear the edge of both skinned parts of the drum with the teeth attached. As soon as the foreskin began to bite, the jackal said, “Be smart. Put your hands in together and nab the victim.”

Both of them put their hands inside the drum with the sound of 'Hoon' and began to grope inside. There was nobody inside. Only got hold of each other's hands.

Both shouted, “There are! Nothing here.” And they were beaten to the forehead.
“Lesson: People who make big boons are hollow from inside just like drums.”
After hearing this story, Pinglak said, “Brother, what should I do?” When my entire family and all my friends are afraid to run away, how can I be the only patient?

Damanak said, “What is the fault of your servants! The servants will do as the owner does. Even then, you stay here until I find out exactly about that voice.”

Pinglak asked in surprise, “Are you really thinking of going there?”

Damanak replied, “Any work that a worthy servant can do by the command of the master, whether he has to put his hand in the snake's mouth or cross the sea. Kings should keep such a servant close to them forever.”

Pinglak said, “If this is the case then go, gentleman, may your path be auspicious.”

Damanak saluted him and started moving towards the voice.

Pinglak regretted that I had unnecessarily come to the words of the oppressor and told him the secret of my mind. What is his belief He is disgusted because of being stripped of the first minister's post? To take revenge, it is possible that the oppressor gets greedy to meet the enemy and later ambush and kill me. Well, now there is only one way to hide somewhere and see the path of the oppressor.

On the other hand, Damanak reached the Sanjeevak while searching, so there was no place for his happiness. The fear of which lion was dying. He is just a small bull. The oppressor started thinking of benefiting from this situation — now Pinglak can be easily subdued by doing anything from this bull to a treaty or Deity. Thinking the same, he returned to Pinglak.

Pinglak asked, “Did you see that terrible creature?”

Damanak said, “By your grace I have seen him.”

Pinglak asked to erase his blush, “Then how did that powerful animal leave you?” Perhaps he would have left you because powerful people hate or befriend the same force as them. Where is that Mahabali and where is a despised, humble creature like you!

Damanak, hiding the anger of the mind, said, “That's right. He is really great. I am powerful, and I am a petty, lowly creature. Even if you say so, I can bring it and serve you.”

Pinglak was surprised and said, “You tell the truth? Is this possible?”

Damanak said, “Nothing is impossible for the intellect.”

Then Pinglak said, “If this is the case then I appoint you as my minister from today itself.” I give you the right of mercy and punishment on the subjects.

Pleasantly oppressed after getting the position and authority, he walked gracefully to Sanjeevak and growled and said, “Ore evil bull, come here. My lord Pinglak is calling you. In this way, how dare you to tremble fearlessly?”

Damanak replied, “Hey! Don't you know the king of forest, lion Pinglak? Now you will know. See, the lion sitting with his family under the banyan tree is our lord Pinglak.”

Hearing this, Sanjeevak shivered. He said in a bitter voice, “Brother, you look clever. Forgive me your master, I will go with you right now.”

Damanak said, “It's okay, yours! Okay, stay. I just come by asking Swami.”

He went to Pinglak and said, “Swami, he is not an ordinary animal. That is the vehicle of Lord Shankar, Taurus. On asking me, he told that by the order of Lord Shankar, he regularly comes here and grazes green grass on the banks of Yamuna and roams in this forest.”

Pinglak said fearfully, “This will be true because without the grace of God, this creature that grazes the grass cannot stray fearlessly in such a way into a forest full of snakes.” Well, tell me what he says now?

Damanak said, “I have told him that this forest is in the possession of my lord Pinglak, the vehicle of Bhagwati Durga, so walk with him and live happily in this forest. He has begged you to listen to me.”

Pinglak was very happy. He said praising, “Minister, I bless you! I gave him a grant; But you also bring me tribute from him and bring him to me.”

Damanak shuddered at his intelligence and luck and then reached Sanjeevak. Said, “Friend! My master has given you a grant. Now you go with me fearlessly. But remember that you should treat us appropriately even after getting the king's favor and grace. Do not sit in pride and behave arbitrarily. I will rule in due course. Both of you will get the happiness of Rajya-Lakshmi by your stay in the post of minister Those who do not properly respect good, moderate and inferior people due to arrogance, even after receiving the honor of the king, suffer like Dantil.”