Panchatantra:
​Hatred Of Crows And Owls 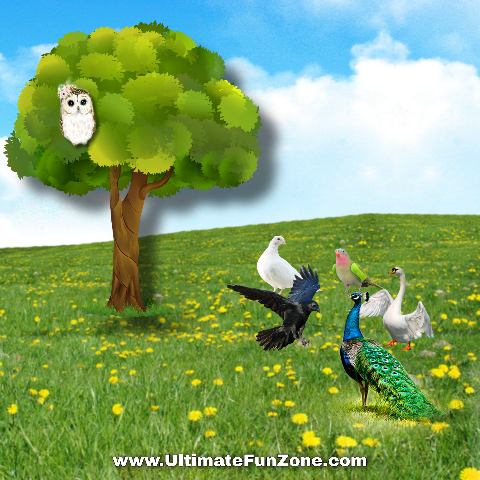 Once upon a time, all the different kinds of birds, such as swans, parrots, herons, cuckoos, chataks, pigeons, owls, and so on, gathered together and gave their king Vainteya some advice. They said that their king is only interested in the worship of Vasudeva and does not take any steps to protect them from the hunters. As a result, another king of the birds should be selected After several days of deliberation, the group came to the conclusion that the majestic owl should hold the position of king.

The preparations for the consecration started, holy water was brought from various shrines, jewels were placed on the throne, golden ghats were filled, the Mangala recitation started, the Brahmins started the Vedas, and the dancers prepared for the dance. Just as Ulukraj was about to sit on the throne, a crow appeared out of nowhere.

What did the crow make of this special occasion? Why exactly is this festival being held? When the other birds saw the crow, they couldn't believe their eyes and were startled. Nobody had even bothered to call him. In spite of this, he was aware that the crow was the most politically astute of all the birds; hence, all the other birds converged around him in order to pray to him.

When the crow learned that Uluk Raj had been crowned king, it chuckled and remarked, “This election is not proper. When there are so many beautiful birds around, such as peacocks, swans, cuckoos, storks, chakravaks, shuks, etc., it is inappropriate to crown a blind owl and a bird with a crooked nose as kings. By his very character, he is hostile and resentful. Therefore, the King of the Vanateya is now seated. It is a dangerous and counterproductive strategy to install a new king on the throne while the previous monarch is still alive. On this planet, there is only one sun, and via his radiance, he casts light over the entirety of the planet. It is a disaster waiting to happen when there are several suns in the sky. There are a great number of suns that emerge throughout the pralaya; nevertheless, they only bring disaster and misery into the planet. One person can have the title of king. The repetition of his name results in the production of art.

“You will surely perish if you treat a miserable, slothful, cowardly, addicted, and bitter-spoken bird like an owl monarch,” the proverb warns.

After hearing what the crow had to say, all the other birds flew away without donning the crown of the owl. Abhishek, his buddies Krikalika, and the crow were the only ones who stayed after everyone else had left. The owl voiced its curiosity by asking, “Why wasn't I anointed?”

Krikalika exclaimed, “Friend! The hue was thrown off by the arrival of a crow.” Only one bird, a crow, can be seen perched in this location; the others have flown away.

After that, the owl addressed the crow by calling it a “wicked crow! What have I done wrong to you that you are preventing me from getting my task done? Starting now, I shall have the animosity of your ancestors.”

After making this statement, the owl flew away from that location. The crow appeared to be in a great deal of distress and sat there. He reasoned to himself, “I have a personal vendetta against an owl for no good reason.” Both meddling in the business of others and speaking the unvarnished truth may be extremely hurtful.

After having this thought, the crow flew away from that location. Since that time, owls and crows have been predisposed to naturally dislike one another.
Share This Page On...
Home → Fun Zone → Stories → Panchatantra → Sandhigraha/Kakolukiyam → Panchatantra: Hatred Of Crows And Owls