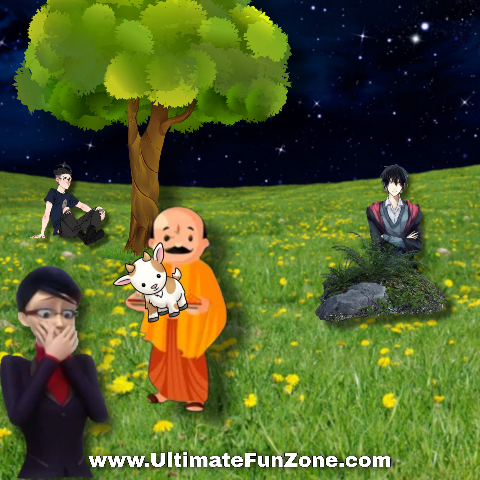 In a village, there was a Brahmin by the name of Sambhudayal who lived there. When he got there, he was carrying a goat that had been given to him by his host. The trail was quite lengthy and very desolate. As he proceeded on, he ran across three thugs along the path. After seeing the goat perched on the Brahmin's shoulder, the three of them devised a plan to steal it.

The brahmin was stopped by one thug, and said, “Pandit ji, what are you carrying on your shoulder?” What are these unfortunate events trying to accomplish? Because he is a Brahmin, the dog is being carried on his shoulders by him.

He was reprimanded by the Brahmin, who asked him, “Have you gone blind? It doesn't appear like it's a goat.”

After that, the first thug spoke up and stated, “Well, my duty was to inform you. What if you need to transport the dog using your shoulders instead? You are familiar with and your job.”

The brahmin eventually came upon another thug after just a short distance of travelling. He stopped the brahmin and asked the panditji, “Don't you know that people of high caste should not carry a dog on their shoulders?” The panditji said that he did not know that rule.

The Pandit reprimanded him, and then continued on. As he proceeded farther, he came upon the third thug.

After moving just a short way, he dismounted and let the goat down off his shoulder before continuing. After they had finished off the goat, the three criminals sat down to a hearty meal here.
Lesson
Telling a lie over and over again makes it seem like the truth. So work with your mind and believe in yourself.
Share This Page On...
Home → Fun Zone → Stories → Panchatantra → Sandhigraha/Kakolukiyam → Panchatantra: Goat, Brahmin And Three Thugs