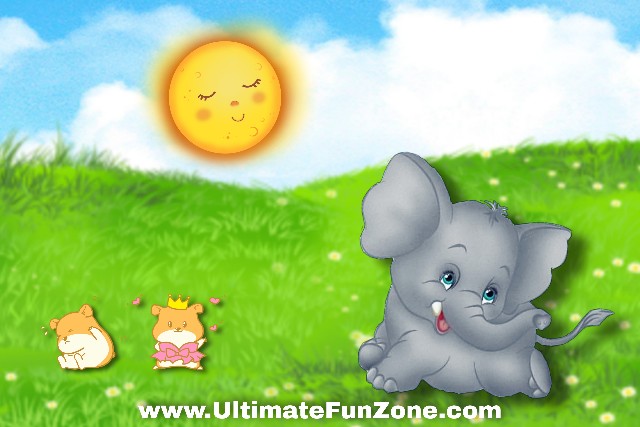 In ancient times, the city situated on the banks of a river was the center of trade. Then came the bad days of that city, when it rained heavily for a year. The river changed its course.

There was no drinking water for the people and on seeing the city became deserted. Now that place was left only for rats. Mice and rats started appearing all around. The whole kingdom of rats was established. The Mushakraj became the king of that kingdom of rats. Look at the fate of the rats. After their settlement, a water source broke out from the ground outside the city, and it became a big reservoir.

There was a dense forest not far from the city. Countless elephants lived in the forest. Their king was a huge elephant named Gajraj. There was a severe drought in that forest area. Animals started wandering here and there in search of water. The heavy bodied elephants were in plight.

Distraught with thirst, the elephants started crying and dying. Gajraj himself was worried about the problem of drought and knew the plight of elephants. One day Gajraj's friend, the eagle, came and reported that there was a reservoir on the other side of the ruined city. Gajraj ordered everyone to immediately walk towards that reservoir. Hundreds of elephants walked away trying to quench their thirst.

After much deliberation, the ministers of Mushkraj said, “Your Majesty, you should go and talk to Gajraj. He is a kind elephant.”

The mouse king went to the elephant forest. Gajraj was standing under a big tree.

The mouse king climbed on top of the big stone in front of him and saluted Gajraj and said, “Gajraj salutations to the mouse king. O great elephant, I want to make a request.”

The sound was not reaching Gajraj's ears. The kind Gajraj sat down to listen to him and moved one ear to the stone-mounted mouse and said, “Little bro, you were saying something. Please say it again.”

The mouse replied, “O Gajraj, I am called a mouse king. We live in a city built in ruins in large numbers. I am his mouse. Your elephants pass through the middle of the city every day to reach the reservoir. Thousands of rats die every time they are crushed under their feet. If this genocide does not stop, we will perish.”

Gajraj said in a sad voice, “Mushakraj, I am very sad to hear you. We had no idea that we were doing so much misery. We will find a new way.”

The mouse said in a grateful voice, “Gajraj, you have listened carefully to a small creature like me. Thank you. Gajraj, if you ever need us, you will definitely remember.”

Gajraj thought that this little creature would be of any use to us. So he just smiled and sent off the mouse. A few days later, the king of the neighboring country decided to include elephants in the army to strengthen it. The king's men came to catch the elephant. Coming into the forest, they go away silently by laying various traps.

Hundreds of elephants were captured. One night, worried about the elephants, Gajraj was roaming in the forest. Suddenly his feet got caught in the noose of a rope kept by deceit under dry leaves. As soon as Gajraj stepped forward, the rope tightened. The other end of the rope was tied firmly to the thick trunk of a tree. Gajraj started crying. He called out to his servants, but no one came. Who will come near the trapped elephant?

A young wild buffalo respected Gajraj very much. When that buffalo was young, once he had fallen into a pit. Hearing his cry, Gajraj saved his life. Hearing the sound, he ran and reached Gajraj, who was trapped in the noose. He was shocked to see Gajraj's condition.

He cried, “What kind of injustice is this? Gajraj, tell me what should I do? I can even give my life to save you.”

Gajraj said, “Son, you just run and go to the ruined city and tell the whole situation to the king of rats, Mushkaraja. Tell him that all my hopes have been shattered.”

The buffalo ran with all his might and went to the mouse king and told the whole thing.

Moushakraj immediately sat on the back of a buffalo with his twenty-thirty soldiers, and they soon reached Gajraj. The rats jumped from the back of the buffalo and started gnawing on the rope. In no time the rope of the noose was cut and Gajraj became free.
“Lesson: Mutual harmony and love always take away each other's sufferings.”
Share This Page On...
Home → Fun Zone → Stories → Panchatantra → Mitralabh → Panchatantra: Gajraj And Mushakraj