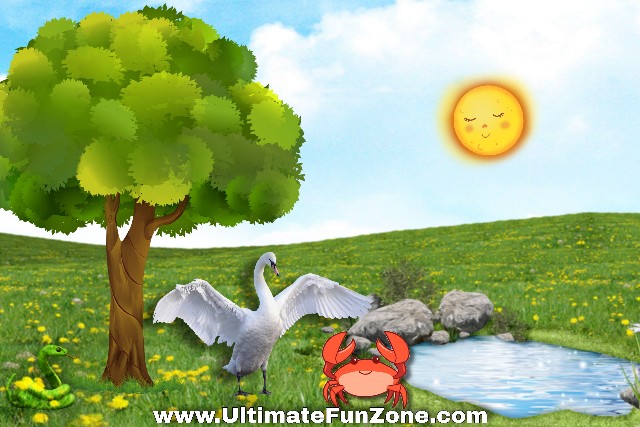 Many herons lived in the shell of a big banyan tree in the forest. A snake also lived in the root of the same tree. He used to eat small children in the neighborhood.

A heron sat down on the bank of the river after childrens being repeatedly eaten by a snake, feeling very sad and disinterested. There were tears in his eyes.

Seeing him so sad, a crab came out of the water and said to him: “Mama! What's the matter, why are you crying today?”

The heron said: “Brother! The thing is that my kids get eaten by snakes time and again. I don't know how to get rid of snake. Tell me some solution.”

The crab thought in his mind, “This heron is my birth enemy, I will tell him such a remedy, so that along with the destruction of the snake, heron will also be destroyed.”

Thinking this he said: “Mama! Do one thing, take some pieces of meat and put them in front of the mongoose bill. After this spread many pieces starting from that bill till the snake's bill. The mongoose will eat those pieces till the snake's burrow and seeing the snake there too, will kill it.”

The heron did the same. The mongoose ate the snake, but after the snake, it also ate the herons living on that tree.

The heron thought of the remedy, but did not think of its other side effects. He got the fruits of his stupidity.
“The Lesson: Think Before You Do.”
Share This Page On...
Home → Fun Zone → Stories → Panchatantra → Mitrabhed → Panchatantra: Foolish Heron And Weasel