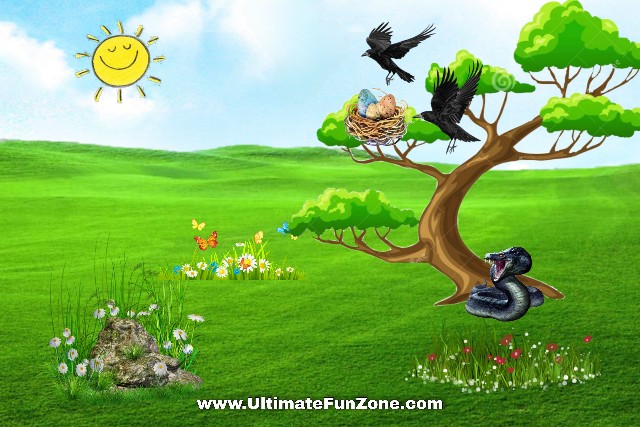 There was a very old banyan tree in a forest. There used to be a crow couple building a nest on that tree. An evil snake came from somewhere in the hollow trunk of the same tree. Every year, when the season comes, the crow will lay eggs in the nest and the rogue snake would get the chance to go to their nest and eat the eggs.

Once the crow returned soon after getting food soon, they saw that evil snake prancing on the eggs in their nest. After eating eggs, the snake went away and the crow says all incidence to the male crow. He says, “Dear, have courage. Now we have come to know the enemy. Will think of some solutions also.”
The crow thought a lot and left the nest and built the nest on a branch high above it and said to the poet, “Here our eggs will be safe. Our nest is close to the edge of the tree top and eagles hover in the sky above. Eagles are enemies of snakes The evil serpent will not be able to dare to come here.”

Admitting to the crow's advice, the female crow laid eggs in the new nest, in which the eggs were protected, and the children came out of them. On the other hand, seeing empty their nest, the snake was understood that due to his fear, the crow may have gone from there, but the evil snake kept reconnaissance. He saw that the crow flies from the same tree and is returning there too. It did not take long for him to understand that he had built a new nest on the same tree.

One day the snake came out of the lair and found a new nest of crows. The crow couple had three newborns in the nest. The evil snake swallowed them one by one, and returned to his lair. When the crows returned, they were stunned to find the nest empty. Seeing the disintegration in the nests and the scattered feathers of the young crows, he understood the whole scene. The crow's chest started bursting with sorrow. The crow shout up “So will my children continue to be snake food every year?”

Male Crow said, “No! Admittedly, we have a problem but running away from it is not the solution. Friends are useful at the time of disaster. We should get advice from a fox friend.”

Both immediately went to the fox. The fox heard the sad story of his friends. He wiped the tears of the crows. After thinking a lot the fox said “Friends! You do not need to leave that tree. There is an idea in my mind, that can get rid of that evil.” The fox told the trick in his clever mind. Hearing the tricks of the fox, the crows jumped with joy. He thanks the fox and returns to his home.

The next day the plan was to be implemented. There was a huge lake in the same forest. Lotus and Nargis flowers bloomed in it. Every Tuesday, the princess of that region used to come to water sports with her friends. He was accompanied by bodyguards and soldiers.
​
This time the princess came and got into the water to bathe in the lake, then the crow came flying as per the plan. He looked at the clothes and jewelry taken by the princess and her friends on the banks of the lake. On the clothes, the princess's favorite diamond and pearl necklace was placed in a unique necklace.

When the soldiers remained a short-distance away, the crow dropped the princess's necklace in such a way that it fell within the snake's lair. The soldiers ran to the lair. His chieftain peeped inside the lair. He saw the necklace there and a black snake near it.

He shouted “Move back! There is a snake inside.” The leader soldier speared within the lair. The snake was injured and came out hissing. As soon as he came out, the soldiers sliced ​​him with spears.
“Lesson: By using intelligence, we can defeat the greatest power and enemy, using intelligence can solve every crisis.”
Share This Page On...
Home → Fun Zone → Stories → Panchatantra → Mitrabhed → Panchatantra: Evil Snake And Crows