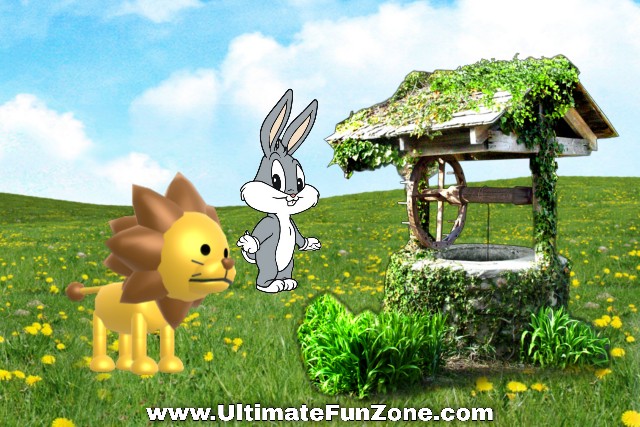 A very big lion lived in a dense forest. He would go on hunting every day and would do the work of not one, not two or many animals. The animals of the forest began to fear that if the lion continued to hunt in this way, one day it would come that no animals would survive in the forest.

There was chaos in the entire jungle. It was necessary to take some measures to stop the lion. One day all the animals of the forest gathered and started considering this question. In the end, they decided to go to the lion and talk to them about it. The next day a group of animals reached the lion. Seeing him coming towards him, the lion panicked, and he roared and asked, “What's the matter? Why are you all coming here?”

The leader of that animals said, “Maharaj, we have come to request you. You are the king and we are your people. When you go out hunting, many animals are killed. You would not have been able to eat them all. In this way our number is decreasing. If this continues to happen, in a few days no one except you will be left in the forest. How can a king even live without subjects? If we all die then you too will not be king. We want you to remain our king forever. We request you to stay at your home. Every day, we would send an animal to eat yourself. In this way both the king and the subjects will be able to live peacefully.”

The lion felt that there was truth in the matter of animals. He thought for a moment, then said, “Good thing. I accept your suggestion. But remember, if on any day you don't send me full food to eat, I will kill as many animals as I want.” The animals have no choice. So they accepted the condition of the lion and went to their respective homes.

From that day onwards, an animal was sent every day to eat the lion. For this, one animal was selected by rotation from all the animals living in the forest. A few days later, it was also the turn of the rabbits. A young rabbit was chosen to feed the lion. The younger the rabbit, the smarter he was. He thought, it is foolish to die at the hands of a lion in vain. There must be some way to save your life, and if possible, you should find an idea that can get rid of this trouble forever. At the end, he found a way.

The rabbit slowly relaxed towards the lion's house. When he reached the lion, it was too late.

The lion was feeling badly due to hunger. When he saw only a small rabbit coming towards him, he got angry and roared, “Who sent you? One is as stubborn, the other is coming so late. I will fix all those idiots who sent you. If I didn't do every single thing, my name is not even a lion.”

The young rabbit bowed respectfully to the ground, “Maharaj, if you listen to me kindly, you will not blame me or any other animals. They knew that a small rabbit would not have enough for your food, so they sent six rabbits. But on the way we find another lion. He killed and ate five rabbits.”

On hearing this, the lion roared and said, “What did you say? The second lion? Who is that? Where did you see him?”

“Maharaj, he is a very big lion”, the rabbit said, “He came out of a big cave inside the ground.” He was going to kill me. But I told him, “Sarkar, you have no idea what you have oppressed. We were all going to our chef's food, but you have eaten all his food. Our chef will not tolerate such things. They will surely come here and kill you.”

At this he asked, “Who is your king?” I replied, “Our king is the greatest lion of the forest.”

Maharaj, As soon as I said this, he turned red-yellow with anger and said, “I am the king of this jungle. All animals here are my subjects. I can do with them as I want. Attend the thief whom you call your king in front of me. I will tell him who the real king is.” Saying so much, the lion sent me here to get you.

The lion got very angry on hearing of the rabbit, and he started thundering again and again. The whole forest started to tremble due to his terrible thunder. “Tell me the address of that fool immediately”, the lion roared, “I will not rest until I kill him.” “Very good chef,” the rabbit said, “Death only. That is the punishment of the wicked. If I were bigger and stronger, I would have broken it into pieces myself.”

The lion said, “Come on, show me the way, where to go immediately?”

Come here Maharaj, here, the rabbit leading the lion took the lion to a well and said, “Maharaj, that evil lion lives in the fort under the ground. Just be careful. The enemy hiding in the fort is dangerous.”

“When I first saw him, he was standing outside here.” Seeing you come, he entered the fort. Let me show you.”

The rabbit came close to the well and asked the lion to look inside. When the lion peeked inside the well, he saw his shadow in the water of the well.

Seeing the shadow, the lion roared loudly. Hearing the echo of his own roar coming from the well, he understood that the other lion is also roaring. He immediately jumped into the well with the intention of killing the enemy immediately.

Before jumping, he first hit the wall of the well, then fell into the water from the pit and died by drowning. Cleverly discharged from the lion, the young rabbit returned home. He told the story of the lion being killed to the animals of the forest. The news of the enemy's death spread happiness throughout the forest. All the animals in the forest started cheering the rabbit.
“Lesson: Even in the circumstances of extreme crisis, we should act wisely and cleverly and try till the last moment. By acting smartly and cleverly, we can overcome a terrible crisis and defeat even the most powerful enemy.”
Share This Page On...
Home → Fun Zone → Stories → Panchatantra → Mitrabhed → Panchatantra: Clever Rabbit And Lion