Panchatantra:
​As It Is 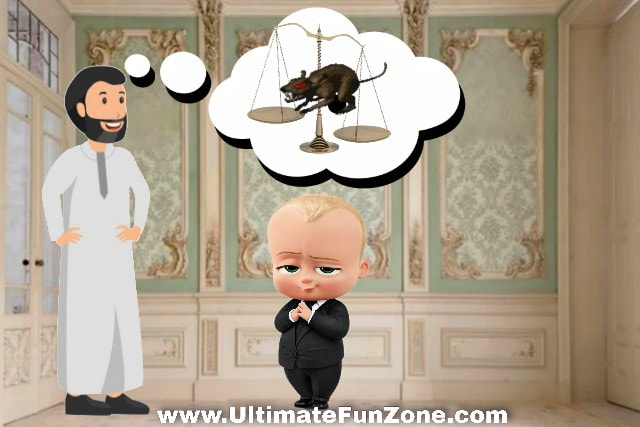 At one place there lived a Bania boy named Jirnadhan. He thought of going abroad in search of money. There was no special wealth in his house, there was only a heavy iron scale with a heart. Keeping it in the possession of a moneylender, he went abroad. After coming back from abroad, he asked Mahajan for his heritage back.

Mahajan said, “The rats ate the iron scales.”
Baniya's boy understood that he did not want to give that scale. But now there was no solution.

After thinking for a while he said, “No worries. If the rats eat it, it is the fault of the rats, not yours. Don't you worry about it.”

After a while he said to Mahajan, “Friend! I am going for a bath on the river. You send your son Dhandev with me, he too will come to bathe.”

Mahajan was very impressed by Baniya's gentleness, so he immediately sent his son to take a river-bath with them.

Baniya took Mahajan's son some distance away and locked him in a cave. A large rock was placed at the entrance of the cave, so that he could not escape.

Locking him there, when he came to Mahajan's house, Mahajan asked, “My son also went with you for a bath, where is he?”

Baniya said, “The eagle has taken him away.”

Mahajan, “How can this happen? Can an eagle ever carry such a big child?”

Bania, “Good man! If the eagle cannot carry the child away, then even the rats cannot eat the heavy scales. If you want a child, take out the scales and give it.”

In the same way, both of them reached the palace while arguing. There, in front of the judge, Mahajan while narrating his sorrow-story said, “This bania has stolen my son.”

The cleric said to the bania: “Give it his boy.”

The bania said: “Your Majesty! The eagle has taken him away.”

Dharmadhikari: “Can an eagle ever take away a child?”

Bania: “Lord! If a rat can eat a heavy scale with a heart, then an eagle can also carry a child away.”

On the question of Dharmadhikari, Baniya narrated the whole story of his scales.
“Lesson: You get as you do.”
Share This Page On...