Panchatantra:
​A Pair Of Titihri And Pride Of The Sea 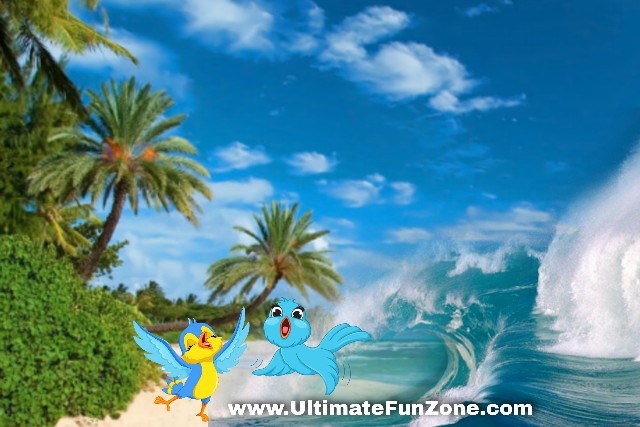 A couple of Titihri lived in one part of the beach. Before laying eggs, Titihri asked her husband to search for a safe land.

Titihre said: “All the places here are safe enough, don't you worry.”

Titihri: “When the tide comes in the sea, its waves drag even the drunken elephant away, so we should look for some place away from these waves.”

Titihra: “The sea is not so daring as to harm my children. It is afraid of me. Therefore, you should be sure to lay eggs here on the shore.”

The sea heard these words of Titihra. He thought: “This titihra is very arrogant. Even with legs facing the sky, it sleeps because it will fall on these legs and hold the sky. Its pride must be broken.” Thinking this, when the tide came, he threw the eggs of Titihari in the waves.

When Titihri came the next day, she said to Titihre crying after seeing the eggs flowing: “Fool! I had already said that the waves of the sea will carry them away. But you arrogantly did not pay attention to me. Even on the words of your loved ones. He who does not give ear is bound to suffer. Apart from this, the wise are also successful among the wise, who think in advance about the disaster without coming, and whose intellect immediately thinks of a way to protect itself. Those who say 'what will happen, will be seen' are soon destroyed.”

Hearing this, Titihre said to Titihri: “I am not as foolish and selfless as 'Yadbhavishya'. Behold the miracle of my intellect, I now take out the water with my beak and dry the sea.”

Titihri: “Your enmity with the sea does not suit you. What is the use of getting angry over it? Seeing our power, we should envy someone. Otherwise, we will move like a moth burning in the fire.”

Titihra still kept on bragging about drying up the sea with his beaks. Then, Titihri again refused him and said that how will you empty the sea which is constantly being filled with water by hundreds of rivers like Ganga-Yamuna?

Even then Titihra remained bent on his stubbornness. Then, Titihri said: “If you are determined to dry the sea, then act on the advice of other birds also. Sometimes two small creatures together defeat a creature much bigger than yourself; like birds, woodpeckers and birds.” The frog had killed the elephant together.

Titihra: “Good point. I will also try to dry up the sea with the help of other birds.”

After saying this, he called many birds like heron, stork, peacock etc. and told his sad story. He said: “We are weak, but our friend Garuda can certainly help us in this regard.”

Then all the birds came together to the side of Garuda and started crying and shouting: “Garuda Maharaj! The ocean has done this atrocity on our bird in your presence. We want its revenge. Today he has destroyed the eggs of Titihri, tomorrow he will kill other birds. The eggs will be shed. This atrocity must be stopped. Otherwise, the entire bird will be destroyed.”

Garuda, hearing the cries of the birds, decided to help them. At that very moment the messenger of Lord Vishnu came to him. Lord Vishnu had called him for a ride by that messenger. Garuda angrily asked the messenger to ask Lord Vishnu to arrange another ride. When the messenger asked the reason for Garuda's anger, Garuda narrated the story of the tyranny of the ocean.

Hearing the story of Garuda's anger from the messenger's mouth, Lord Vishnu himself went to Garuda's house. Upon reaching there, Garuda bowed down and said in humble words: “Lord! Taking pride in your shelter, the sea has kidnapped the eggs of my fellow birds. Thus humiliated me too. I want to avenge this humiliation from the sea.”

Lord Vishnu said: “Garuda! Your anger is justified. The ocean should not have acted like this. Come on, let me now get those eggs back from the sea and get them to Titihri. After that we have to go to Amaravati.”

Then the Lord said to the sea with a 'fire' arrow on his bow: “Wicked! Give back all those eggs now, otherwise I will dry you in a moment.”

Fearing Lord Vishnu, the ocean gave back the eggs at that very moment.
“The Lesson: Let the head down of the pride.”
Share This Page On...
Home → Fun Zone → Stories → Panchatantra → Mitrabhed → Panchatantra: A Pair Of Titihri And Pride Of The Sea