Model Of Gallantry The Abhimanyu 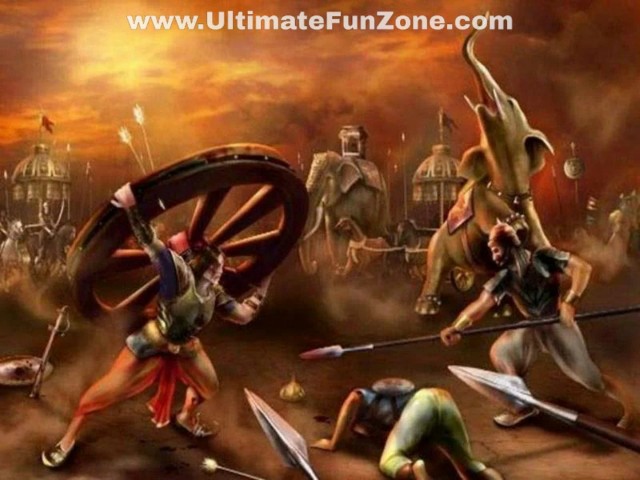 Abhimanyu was the son of Arjuna. His mother Subhadra was the sister of Shri Krishna. This boy was very promising. All the qualities of his father were present in him. The nature was very angry and it was not known to anyone to fear. Due to this fearlessness and angry nature, it was named Abhi (fearless) Manyu (angry) 'Abhimanyu'.

Arjuna gave all the knowledge of Dhanurveda to him. He also learned to operate other weapons. In the might, it was no less than any warrior. It was at the age of sixteen that it had the power and ability to challenge the best fighters. His face and body was also like an extraordinary warrior. He had high and full shoulders like Taurus. There was a bulging chest, and there was a vigor in the eyes.

There was a fierce battle of Mahabharata. The Bhishmapitamah had collapsed. After that Guru Dronacharya assumed the command of the Kauravas. Arjuna was fighting with full might. He was distracting the Kaurava army by raining arrows like fierce fire. Dronacharya could not stop Arjuna's velocity by trying so hard. Sometimes it seemed as if the Pandavas would defeat the Kauravas in a few moments. The war started in the morning. Shri Krishna blows his Panchajanya, at that very moment Arjun's arrows start making a noise in the Kaurava army. This destruction goes on till dusk.

Duryodhana, worried about this, said to Guru Dronacharya, “O Acharya! If this motion of the Pandavas is not stopped, the Kaurava army will be distracted and run away from the battlefield at any moment. Stop the rising power and all the efforts of Arjuna be made a failure.”

Seeing Duryodhana thus worried, Guru Dronacharya somehow thought of a way to remove Arjuna from the battlefield. Duryodhana said the revictors challenged Arjuna away from Kurukshetra to battle. Arjun went to fight them. Dronacharya composed the Chakravyuh from behind him and sent a message to Yudhishthira that either the Pandavas should come and break this Chakravyuha of the Kaurava-Sena or accept their defeat.

When the message reached Yudhishthira, he got worried because no Pandava knew to break the Chakravyuh except Arjuna. Arjuna was fighting far away from the revictors. Seeing himself unable to break the Chakravyuh, there was a ruckus in the Pandavas' camp. Yudhishthira, Bhima, Dhrishtadyumna, etc. were many mighty warriors, who could challenge the most mighty Kaurava fighter, but no one knew how to break the chakravyuh. It was such an array, in which it was difficult to enter and break it first and then successfully get out of it was a more difficult task. All the chief nobles of the Kaurava army were guarding the gates of that Chakravyuh.

While everyone was sitting in the assembly and without Arjuna, except that they accept their defeat, they could not think of any other solution. Abhimanyu came there and after finding everyone submerged in deep concern started asking Yudhishthira. What is the reason for concern? Yudhishthira told the whole thing. Hearing him, that brave child said with courage, “Arya! Don't worry about it. This conspiracy of the evil Kauravas will not succeed in any way. If not Arjuna, then his heroic son Abhimanyu is here. You accept Duryodhana challenge. I will go to break the Chakravyuh.”

Hearing Abhimanyu, everyone was surprised. All together feels like their bowed down heads rose up. Yet Yudhishthira considered it as Abhimanyu's foolishness. He asked, “Son! Except your father Arjuna, none of these know how to penetrate Chakravyuh, then how can you penetrate it? If Arjun had been there today, they would not have to bear this insult. Even in the evening time he could not come to Gandivadhanva. And this army of Pandavas, with whom this fierce hero has been fighting till now, will accept defeat by putting on his weapon. So cruel luck.”

Saying this, Yudhishthira got impatient. At the same moment, Abhimanyu roared like a lion and said, “Arya! You don't consider me a child. The pride of the Pandavas can never be erased during my stay. I know how to penetrate the Chakravyuh. The father had taught me to enter the Chakravyuh, but did not teach me to get out. You should not worry in any way. I will break the chakravyuh by believing in my might and get out of it too. You accept the challenge, giving me permission to war and also send a message to Duryodhana that Son of Arjuna is coming to fail your challenges.”

How many times Abhimanyu persevered for this. The situation was also like this. Yudhishthira gave him permission. Abhimanyu took his bow and went towards the battlefield. Bhimsen, Dhrishtadyumna and Satyaki walked to protect him.

Approaching the Chakravyuh, Abhimanyu began to rain arrows and soon with his might, he broke the first gate, and he entered the Chakravyuh at the speed of an arrow, but Bhimsen, Satyaki and Dhrishtadyuman were not behind him in the Chakravyuh. To enter they showed so much might, but Jayadratha stopped him and from there Abhimanyu remained alone. That brave son of Arjuna was a wonderful warrior. At the entrance of the phalanx, he had to fight fiercely with many warriors, but his might was like fierce fire. Whoever came in front of him, either got smashed or got distracted and ran away. In this way, he was going to break every door of the Chakravyuh. The warriors of the Kauravas tried to suppress that brave child, but they could not somehow subdue him. Disturbed by his sharp arrows, Duryodhana said to Guru Dronacharya, “O Acharya! This heroic child of Arjuna has been wandering all around, and we cannot stop his gruesome speed after trying hard. One by one all the gates. He has broken it. It turned out to be war skilled and mighty like Arjuna. Now the Pandavas cannot be defeated in any way.”

In the same way Karna also panicked and said to Dronacharya, “O Gurudev! I am also surprised to see the speed of this mighty child. Its sharp arrows are disturbing my heart. He is just like his father Arjun. If we do not stop him in any way, then this trick will go in vain. So in no way we should allow him to go alive from the Chakravyuh.”

Seeing the valor of Abhimanyu, Dronacharya was engulfed in anxiety for a few moments. Karna, Dushashana etc. were defeated by The great son of Arjuna and after killing the demon Alambush from the battlefield, he killed Brihadbal. He also killed Duryodhana's son Lakshmana in front of him. Great knights can't do anything, and he broke the chakravyuh, devouring everyone like a fiery fire.

When all the efforts of the Kauravas went in vain, they thought of using deceit. No warriors could win over Abhimanyu by fighting separately, so they decided to attack him together. Kripacharya, Karna, Ashwatthama Brihadbal (Shakuni's cousin), Kritavarma and Duryodhana etc. Six maharathis surrounded him and attacked him fiercely. Karna cut that child's bow with his arrows. Bhoja killed his horses, and Kripacharya took the life of his last guards. In this way, Abhimanyu became completely unarmed, but still he began to distract the enemies by whatever came in his hands. Shortly there was a bludgeon in his hand. With that, he killed many warriors. The son of Dushashana came against him. There was a fierce struggle. What would Abhimanyu alone do in front of six? The warriors pierced his body with his arrows. Now he was tired of fighting. At the same time, the son of Dushashana came and hit the bludgeon on his head, due to which that brave son of Arjun fell on the earth at that moment and got up from the earth forever. At the time of his death, the joy of the Kauravas began to rise. Duryodhana and all his companions celebrate victory at the death of this unarmed child. No one had any regret and remorse over his unjust killing.

When news of Abhimanyu's death reached the Pandava-party, Yudhishthira was distraught with grief. In the absence of Arjuna, he sent his son to the battlefield. Now his heart was distraught at what answer he would give him when he arrived. Bhima also started crying over his nephew's death. The death of Veer Abhimanyu caused a ruckus in the entire camp of Pandavas.

When Arjuna came back after ending the war with the revictors, he became unconscious after hearing the sad news and started crying for Abhimanyu. Shri Krishna gave him a lot of patience, but Arjuna's anguish did not go away in any way. The fire of vengeance started to burn in his body and he was not satisfied until he killed Jayadratha.

Sri Krishna also did not feel any less sad over Abhimanyu's death, but he was a yogi, he did not know to cry like a boy. The fire of vengeance was burning inside them. He had clearly stated that he would not obey his nephew Abhimanyu's death without taking revenge.

The name of Abhimanyu's woman was Uttara. She was the daughter of Matsya-Naresh Virat. Arjun used to teach Uttara to dance and sing at Virat's residence at the time of his anonymity. Later, Virat came to know about everything, so in fear of people, he did not want to marry his daughter with any other man except Arjun. After Arjuna did not accept, Virat married Uttara with his son Abhimanyu. Both of them were married in their childhood. The practice of child marriage was not so prevalent in that era, but there was a political reason behind the marriage. After this, the Pandavas could get all kinds of help from the Matsya-Naresh.

On her husband's death, Uttara was mad with mourning. No matter how much Sri Krishna had explained it to her, yet for many days her cry did not stop for a single moment. She was pregnant at that time. The militant Ashwathama used Brahmastra on this womb child to destroy the Pandava dynasty completely, but was stopped by Sri Krishna and thus Sri Krishna protected the clan of Pandavas. After a certain period, the child was born from the womb of Uttara. Since this child was born after everything was lost, it was named Parikshit. This is what carried the lineage of Pandavas forward.
Share This Page On...
Home → Fun Zone → Stories → Mythological → Model Of Gallantry The Abhimanyu