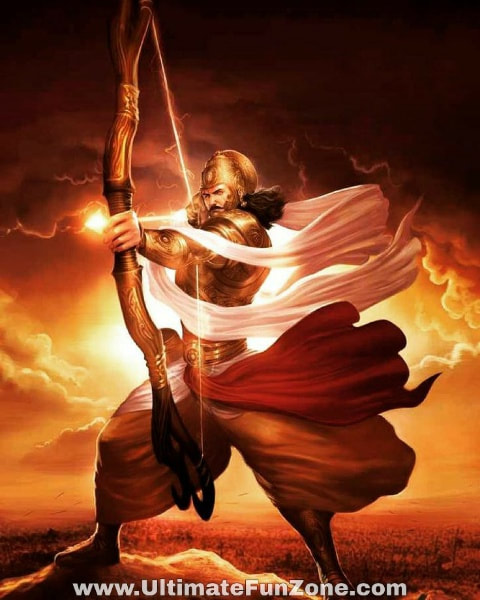 The fierce war of Mahabharata was going on. Arjun had gone away from the battlefield. In order to defeat the Pandavas in the absence of Arjun, Dronacharya composed the Chakravyuh. Arjun's son Abhimanyu entered it to penetrate the Chakravyuh.

He skillfully took the six stages of Chakravyuh, but in the seventh phase he was surrounded by seven maharathis like Duryodhan, Jayadrath etc. and broke on him. Jayadrath attacked the unarmed Abhimanyu from behind. The attack was so intense that Abhimanyu could not bear it, and Veeragati was attained.

Hearing the news of Abhimanyu's death, Arjun became mad with anger. He vowed that if he did not kill Jayadrath before sunset the next day, he would commit suicide. Frightened Jayadrath approached Duryodhan and told him about Arjun's vow.

Duryodhan said to removing his fear, “Don't worry, friend! I and all the Kaurav army will protect you. Arjun will not be able to reach to you tomorrow. He has to commit self-immolation.”

The next day the war started. Arjun's eyes were looking for Jayadrath, but he is nowhere to be found. Day started to pass on. Gradually Arjun's despair increased. Seeing this, Shri Krishna said: “Parth! Time is passing by and the Kaurav army surrounds Jayadrath in defense cover. So, hurry and kill the Kaurav army and move towards your goal.”

Hearing this, Arjun got excited and started fighting with enthusiasm. But to reach till Jaidrath was difficult. It was going to be dusk. Then Shri Krishna spread his illusion. As a result, the sun hid in the clouds and evening confusion arose. ‘It is evening and now Arjun will have to commit self-immolation.’

Jayadrath and Duryodhan jumped with joy, thinking this to see Arjun commit self-immolation.

Jayadratha came in front of the Kaurava army and began to laugh.

Seeing Jayadratha, Shri Krishna said: “Parth! Your enemy is standing in front of you. Pick up your bow and kill him. Look it's not sunset yet.”

After saying this, he withdrew his illusion. Suddenly the sun came out of the clouds. Everyone looked up in the sky. Sun was still shining.

Seeing this, the ground slipped under the feet of Jayadrath and Duryodhan. Jayadrath was about to escape, but by then Arjuna had lifted his Gandiva.

Then Shri Krishna said warningly: “O Arjun! It was boon given by Jayadrath's father that if person who lay down his head to earth would be also split into a hundred pieces of his head. Therefore, if its head falls on the ground, then your head will also be spilled into a hundred pieces.

Hey Parth! Jayadrath's father is meditating at a distance from here in the north direction. You cut its head in such way that it falls into the lap of its father.”

Arjun listened attentively to Shri Krishna's warning and meditated towards his goal and released the arrow.