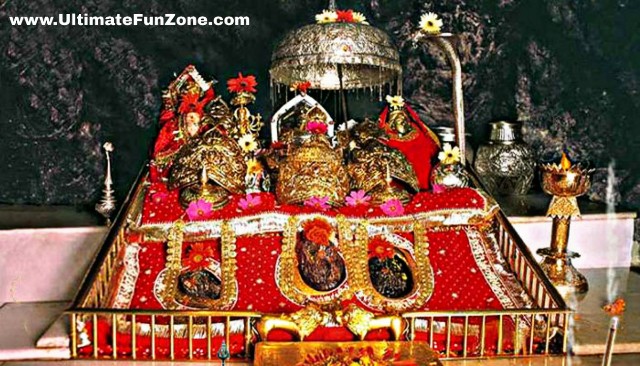 You must have heard the name of Vaishno Mata of Jammu. Today we are telling you the story of these, which are discussing in Jammu and Kashmir for many years. Sridhar, an ardent devotee of Mata, lived in Hansali village near Katra. They did not have any children.

They were very unhappy for this reason. One day he called for unmarried young girls to worship Navratri. Maa Vaishno sat among them in disguise as a young girl. The other young girls left, but Maa Vaishno did not go.

She said to Sridhar “Come invite everyone to your house for Bhandare.” Sridhar agreed to that divine girl and sent the message of Bhandare to the surrounding villages. While returning, Gorakhnath and Bhairavnath ji were also invited along with their disciples. All the guests were surprised that which is the young girl who wants to get food to so many people?

Many people sat in Sridhar's hut. The divine girl started serving food from a strange plate. When the girl approached Bhairavnath, he said, “I want meat and liquor.” “All this is not found in the store of Brahmin.” The girl replied in a firm voice. Bhairavnath caught stubbornness, but Maa was able to understand his trick.

She took the form of wind and flew towards Trikuta mountain. Bhairav ​​followed them. She was accompanied by her heroic langur. Maa Shakti meditated for nine months in a cave. Bhairav ​​also reached there in search of her. A monk said to him, “What you consider an ordinary woman, she is a great power.”

Bhairav ​​ignored the monk. Maa walked out of the cave on the other side. That cave is still known as Garbha June. Devi also warned Bhairav ​​to return, but he did not listen. Maa went inside the cave. There was a brave langur at the gate. He fought against Bhairava. When the heroic langur began to wilt in fight, Maa Vaishno took the form of Chandi and killed Bhairava.

Bhairav's head fell into the Bhairon valley. Then Maa gave him a boon that whoever will see the Bhairon after my darshan, all his wishes will be fulfilled. Even today, lakhs of devotees come to see the Maa Vaishno every year. Maa sits in the form of Pindi in the cave.
Share This Page On...
Home → Fun Zone → Stories → Mythological → Maa Vaishnodevi