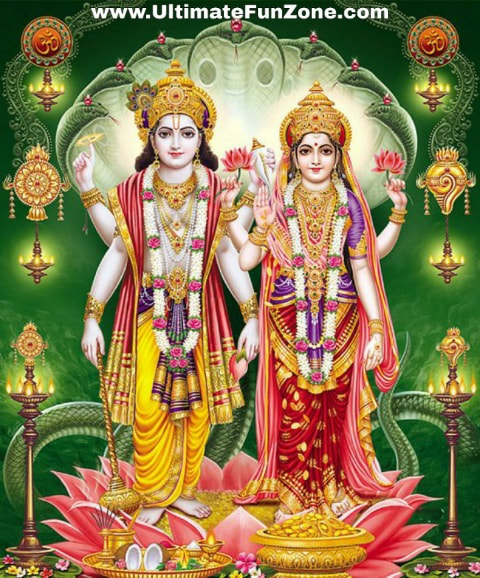 Once Lord Vishnu would get bored sitting on Sheshnag, and he thought of roaming the earth as many years had passed since he came to earth. He got ready for his journey.

Seeing Lord Vishnu to be ready, Maa Lakshmi asked: In this beautiful morning, where you plan to go?

Lord Vishnu replied: Lakshmi, I will roam around the world.

After thinking something Maa Lakshmi said: Hey god, can I roam with you too?

Lord Vishnu thought for two minutes, then replied: On one condition, you can walk with me. When we reach the earth and do not look towards the north direction at any condition.

Goddess Lakshmi agreed to his wish.

Early in the morning Maa Lakshmi and Lord Vishnu reached the earth.

Now the sun was coming out, and the night had gone with light rain, So there was greenery all around earth. There was a lot of peace, and the earth looked very beautiful.

Maa Lakshmi was looking at the earth after being enchanted and forgot what promise she has given to her husband!

During looking at all directions, she didn't recognize, and she started to looks at north aspect.

In the north aspect, Maa Lakshmi saw a very beautiful garden, and from that side there was a lot of fragrance, and very beautiful flowers were blossoming. It was a flower farm.

Maa Lakshmi go there without thinking anything, and brought a lovely flower from there.

When Maa Lakshmi came back to Lord Vishnu, Lord Vishnu had tears in his eyes.

Lord Vishnu told Maa Lakshmi that never take anything of other without granting their permission and also remind her about his condition.

When Goddess Lakshmi came to know about her mistake, she apologized to Lord Vishnu for this mistake.

Lord Vishnu said that you will get the punishment for what you have forgotten!

The gardener from whose farm you have broken the flower, it is a kind of theft. So now you should be a housekeeper of the gardener for three years, after that I will call you back in Baikuntha.

Maa Lakshmi, taking the form of a poor lady, went to the owner of that farm.

The owner's name was Madhav, Madhav's family consist a wife, two sons and three daughters, all worked together in that small farm.

When Maa Lakshmi went to Madhav's hut after becoming an ordinary and poor lady, Madhav asked her who are you sister? And what do you want at this time?

Then Maa Lakshmi said, I am a poor lady, I have no one to look after me; I have not eaten food for many days, give me any work, along with that I will also do your housework, just let me in your house and give shelter in a corner!

Madhav was a master of a very good heart, he felt pity, but he replied, “Sister, I am very poor, from my lower income my house expense runs with difficulties. But even if I had four daughters instead of three, I had to aliment all.

If you like to being my daughter and you can eat dry food like we eat, you may surely come in.

When Maa Lakshmi came to Madhav's hut, on the second day Madhav earned so much money from flowers that he bought a cow in the evening, then slowly Madhav bought a lot of land, and built a big royal house. Everyone buys good clothes, the daughters and wife also made jewelry.

Madhav always used to think that I have got all this after the arrival of this lady, my luck has come to me as this daughter.

4 to 5 years had passed, but Mas Lakshmi still works at his home and in the farm.

One day when Madhav came home after finishing work from his farm, he saw a lady laden with a goddess on the front of her house, looking carefully and recognized that this is her fourth daughter, and she was Maa Lakshmi.

By now, Madhav's entire family had come out, and everyone was surprised to see Maa Lakshmi.

Madhav said, Maa Lakshmi forgiven us, we have got you to work in the house and in the farm, this is a crime. Maa, forgive us all.

Now Maa Lakshmi smiled and replied, Madhav, you are a very good and kind person; you have kept me as your daughter, as a member of your family, in return I give you a boon that you have a happy life and there will be no shortage of money, you will get all the happiness that you deserve, and then the Maa Lakshmi sat in the chariot sent by God Vishnu and went to a Baikuntha.
Share This Page On...
Home → Fun Zone → Stories → Mythological → Lord Vishnu And Maa Lakshmi