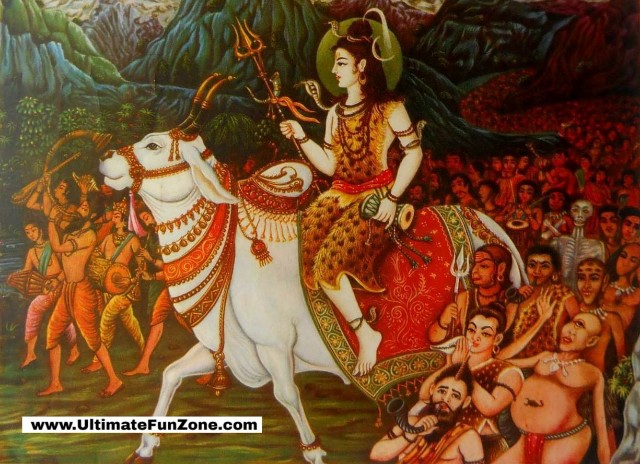 Shankarji got miserable in the farewell of Sati. He used to meditate on Sati every moment and would be busy in his discussion. On the other hand, Sati had also resolved while sacrificing her body that I should be born in King Himalayas and become an ardent lady of Shankar.

Now Jagadamba's resolve was in vain. She entered the womb of Maneka, the wife of King Himalaya at the appropriate time and appeared from her womb. Being the daughter of Parvataraja, she was called 'Parvati'. When Parvati grew up and grew older, her parents started worrying about finding a good groom.

One day suddenly Devarshi Narada came to the palace of King Himalaya and looking at Parvati said that it should be married to Shankarji and they are all worthy of it.

The joy of Parvati's parents did not stop knowing that Jagatmata Sati has appeared as their daughter. They started appreciating their own fate.

One day Lord Shankar roaming in the memory of Sati and went to the same place and started doing penance at Gangavataran, a nearby place. When the Himalayas got information about this, they went to Shiva with Parvati.

There the king politely asked Shiva to accept his daughter in service. At first, Shiva refused to do so, but seeing the devotion of Parvati, he could not defer her request.

After getting permission from Shiva, Parvati started serving her with her friends every day. Parvati always used to keep in mind that Shiva should not suffer from any kind.

She would always wash his feet and receive footprints and worship with faith. Similarly, Parvati spent a long time-serving Lord Shankar. But even after serving in such seclusion with a beautiful girl like Parvati, Shankar never had a problem in his mind.

He would always remain immobile in his meditating. On the other hand, the demon named Tarak started giving great tragedy to the gods. Knowing that Taraka could die from Shiva's son, all the gods tried to get Shiva-Parvati married.

He sent Kamadev to Shiva to make him attracted towards Parvati, but even Kamadev could not disturb Shankar's mind. On the contrary, Kamadev was burned by Shiva's anger.

After this, Shankar too, for his austerities, not stayed there and headed towards Kailash. Parvati felt very sad to be denied Shankar's service, but she did not get disappointed and decided to satisfy Shankar by meditating now.

Her mother denied her as unworthy for austerity, hence she became famous as named 'Uma' - U + Ma (Do not do penance). But this did not affect Parvati. She was not even distracted by her resolve. She, too, went out of the house to do penance on the same peak where Shiva had done penance.

Since then, people started calling that peak 'Gauri-Shikhar'. In the first year she spent her life in fruit plantation, in the second year she started living by eating leaf (leaves of trees) and then she also discarded leaf and hence she called 'Aparna'.

In this way Parvati did penance for three thousand years. Sages were also stunned by seeing her hard penance.

When they all checked and saw that Parvati had unwavering loyalty in them, then they could not hide themselves for long. They immediately appeared in their true form in front of Parvati and was blessed her by granting a boon of marriage.

Parvati returned home after completing her tenacity and narrated all the accounts to her parents. Seeing the harsh penance of his loving daughter flourishing, there was no place for parents to enjoy.

On the other hand, Shankarji sent the Saptarishis to the Himalayas with the proposal of marriage and thus the auspicious date of marriage was fixed.

After the Saptarishis fixed the date of marriage, Lord Shankarji respectfully invited all the gods by Naradji to attend the marriage and ordered his ganas to prepare for the procession.

Nandi, Kshetrapal, Bhairav ​​etc. Ganaraj also set out with some other Ganas. They were all three-eyed. Everyone had a moon on their head and a blue sign around their neck. Everyone wore jewelery of Rudraksha. There was good ash pasted on everyone's body.

They all had applied fresh blood on their body. Some were very holy and some were wearing very disgusting and unholy attire. His jewelery was very scary. He had a male-skull in his hand.

They all gathered around Mahadev Shankarji, dancing and singing and enjoying themselves in their waves.

Chandidevi arrived there as a sister of Lord Rudra, celebrating with great joy. She was wearing snake ornaments. She was sitting on a phantom and wearing a gold urn on her forehead.

Gradually, all the gods also gathered there. In the midst of that deity, Lord Vishnu was seated on Garuda. Pitamah Brahmaji was also present with him with idolized Vedas, Shastras, Puranas, Agamas, Sanakad Mahasiddhas, Prajapatis, sons and many family members.

After meeting all these people, Lord Shankarji rode on his bright, beautiful Taurus. The beauty of Shiva was disguised as a groom.

At the time of the departure of this divine and bizarre procession, the dum-dum of the damurs, the solemn sound of the conch shells, the chanting of the sages, the melody of the yakshas, ​​eunuchs, gandharvas and the enchanting dances of the devangas and the echoes of the mangala songs all ensued.

On the other hand, the Himalayas made grand preparations for the marriage and in the auspicious lagna, Shivaji's procession started at the entrance of the Himalayas. At first, Mainka was very scared to see Shivji's formidable form and his army of ghosts and started to ignore in getting her daughter marriage.

From behind when she saw Shankarji's supremely attractive form of a sixteen-year-old who was luring crores of Kamadevas, she forgot about ignore and gave her daughter as well as her soul at Shankar.

Har-Gauri was happily married. Himachal do the Kanyadan. Lord Vishnu and other gods and god-goddesses presented various gifts. Brahmaji got married them to the Vedokta custom. Everyone returned to their respective places with immense enthusiasm.
Share This Page On...
Home → Fun Zone → Stories → Mythological → Lord Shiva's Marriage