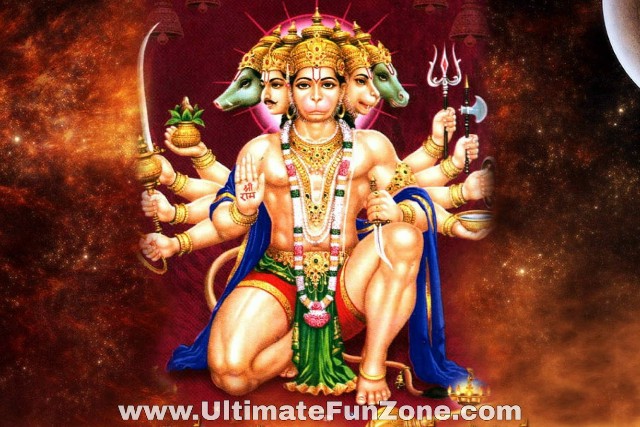 Lord Hanuman's courage and devotional deeds are described in the beautiful episode of Ramayana. Lord Hanuman met Ramji during his exile when Ramji was searching for his wife Sita with his brother Lakshman. Sita Mata was taken away by lankapati Ravana deceit. While searching for Sitaji, both of the brothers reached near Mount Eshmukh where Sugriva used to hide with his followers from his eldest brother Bali. The monkey king Bali had driven his little brother Sugriva out of his empire due to a serious misconception, and he was not ready to listen to Sugriva's argument in any way. At the same time, Bali also kept Sugriva's wife by force.

Seeing Ramji and Lakshman coming, Sugriva sent Hanuman to know his introduction. Hanuman disguised as a Brahmin approached him. On hearing the first word from Hanuman's mouth, Shri Ram told Lakshman that no one can speak without knowing Veda Purana as this Brahmin spoke. Ramji did not find anything wrong with the face, eye, forehead, eyebrows or any other anatomy of that Brahmin. Ramji told Lakshman that on hearing the enchanted utterance of this Brahmin, the enemy will also give up the weapon. He pleased the Brahmin and said that the king would be successful without any intelligence who has spy like you. After hearing all these things from Shri Ram's face, Hanumanji took his real form and bowed down at the feet of Shri Ram. Shriram picked them up and engaged them with his heart. On the same day, there was unbreakable and eternal union of Lord Hanuman and Lord Rama as a devotee. Then Hanuman befriended Shri Ram and Sugriva. Only after this, Shriram killed Bali and brought Sugriva back his honor and pride, and in the Lanka war, Sugriva supported Sri Ram with his monkey army.

In search of Sita Mata, a group of monkeys reached the south coast. But no one had the courage to transcend such a vast ocean. Hanuman himself was also very worried about how to solve this problem. At the same time, Jamwant and other monkeys reminded Hanuman of his amazing powers. As soon as he remembered his powers, Hanuman expanded his form and started flying across the ocean with wind speed. On the way he found a mountain and it told Hanuman that its father had a loan on him, along with that mountain also requested Hanuman to take some rest, but Hanuman thanked the mountain and not wasting any time move forwards. Later on he found a demon who challenged him to enter his mouth, as a result Hanuman accepted the challenge of that demon and very cleverly dressed in a very short appearance and entered the demon's face and came out. In the end, the demon hesitantly admitted that she was testing his intelligence.

Eventually Hanuman crossed the ocean and reached Lanka and was surprised to see the charm and beauty of Lanka. And he also felt sad that if Ravan did not accept, such a beautiful Lanka would be destroyed. Then Hanuman saw Sitaji in the Ashoka-Vatika and told him about himself. He also consoled Mata Sita and also urged her to go back to Lord Shree Ram. But Mother Sita rejected it, saying that it would hurt Shriram's efforts. Hanuman described the message of Prabhu Shri Ram to Maa Sita in such a way that someone tells the great people about the greatness of God.

After meeting Maa Sita, Hanuman destroys Lanka to seek revenge. Ravana's son Meghnad (Indrajit) used Brahmastra to arrest him. While honoring Lord Brahma, Hanuman allowed himself to be tied in the bondage of Brahmastra. He also thought that by taking advantage of this opportunity, he would also meet the famous Ravana of Lanka and estimate his power. Thinking all these things, Hanuman allowed himself to appear before Ravana as a prisoner. When he was brought before Ravana, he gave a warning message of Lord Ram to Ravana, and also said that if Ravana respectfully returns Maa Sita to Lord Ram, then God will forgive him.

In anger, Ravana ordered Hanuman to be awarded death, but Ravana's younger brother Vibhishan intervened, saying that killing a messenger was contrary to ethics. Hearing this, Ravana ordered Hanuman's tail to fire. When the soldiers of Ravana were wrapping cloth in Hanuman's tail, Hanuman lengthened his tail and gave the soldiers an opportunity to fire the tail after disturbing them for some time. As soon as there was fire on the tail, Hanuman, after getting free from bondage, started burning Lanka and finally extinguished the tail fire in the sea and came back to Lord Shri Ram.

When Lakshman fainted in the Lanka war, Lord Hanuman was sent to bring Sanjeevani Booti from Dronagiri mountain, but he could not recognize the booti well, and again showing his might, the whole Dronagiri mountain was brought back towards the battlefield and protected Lakshman's life. Emergingly, Shriram engaged Hanuman with a heart and said that Hanuman, I like you just like my brother Bharat.

The Panchmukhi avatar of Hanuman is also an event of the Ramayana war. Ahiravan, who mastered black magic, kidnaped Ram and Lakshman at bedtime and carried them to Hades. Hanuman also reached Hades in search of him. The main gateway of Hades was guarded by Makardhwaj, a young creature whose body was half of a fish and half of a monkey. The story of the birth of Makardhwaj is also very interesting. Although Hanuman was Brahmachari, Makardhwaj was his only son. After the burning of Lanka, when Hanuman went to the sea to extinguish the fire in the tail, his sweat drop fell into the sea. A fish drank that drop and she became pregnant. This was revealed when the fish was brought to Ahiravan's kitchen. The strange creature that was left alive was extracted from the stomach of the fish. Ahirvan raised him up and made him the guard of the gate of Hades.

Hanuman was not aware of all these things. Although Makardhwaj knew that Hanuman was his father, but he could not recognize him as he had never seen him before.

When Hanuman introduced himself, he realized that he was my father but then he also decided to go to war with Hanuman as his first duty was to protect the gate of Hades. Hanuman very easily subdued him and tied him up at the main gateway of Hades.

After entering Hades, Hanuman finds out that to kill Ahiravana, he will have to extinguish five lamps together. Hence, he wore the Panchmukhi avatar (Sri Varaha, Sri Narasimha, Sri Garuna, Sri Hayagriva and Himself) and extinguished the five lamps together and ended the Ahiravana. After the slaying of Ahiravana, Hanuman made Makardhwaja the king of Hades as per the order of Lord Shri Ram.

With the end of the war, the fourteen years of ousting of Shriram had also ended. At that time, Shri Ram remembered that if he did not reach Ayodhya with the exile, then Bharat would give up his life. At the same time, he also realized that he would be a little late from the last day to go back, thinking that Shriram was worried, but Hanuman went to Ayodhya and informed about Shriram's arrival and saved bharat's life.

After the coronation in Ayodhya, Prabhu Shriram decided to honor all those who had helped him defeat Ravana in the Lanka war. A grand ceremony was organized in his assembly in which the entire monkey army was gifted and honored. Hanuman was also called to take the gift, Hanuman went to the stage but he had no curiosity about the gift. Seeing Hanuman coming up, Shree Ram, overwhelmed with emotion, embraced him and told that there is no gift that can be given to him in return for the contribution that Hanuman has given to his impeccable service and valor. But Maa Sita, presented one of her pearl necklaces to him. After receiving the gift, Hanuman began to see each pearl of the garland, after seeing it, the members present asked him the reason for this, then Hanuman said that he is seeing whether his lord Shri Ram and Maa Sita are in the beads. Because if they are not in them, then this necklace has no value for them. Hearing this, some people said that Hanuman does not have as much love for Lord Shri Ram and Maa Sita as he feels. On hearing this, Hanuman showed his chest to the rip-off people and all were shocked to see that the image of Lord Shri Ram and Maa Sita actually existed in their hearts.
Share This Page On...
Home → Fun Zone → Stories → Mythological → Lord Hanuman In Ramayana War