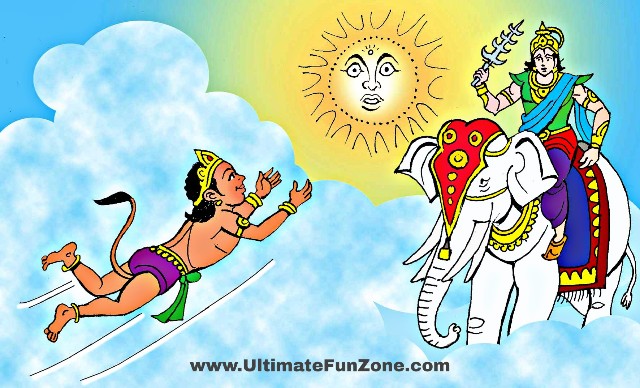 Hanumanji's religious father was Vayu, that's why he is also known as Pawan Putra (Son of Wind). Being divine since childhood, he had a storehouse of unlimited powers within him.

Once in his childhood, considering the sun to be a ripe fruit, he flew it to eat it, at the same time Indra struck him with the Vajra in an attempt to stop him, due to the Vajra, the chin of child Hanuman broke. He became unconscious and fell on the earth. Furious with this incident, Pawan Dev stopped the influence of wind across the world, due to which all beings were in a panic. In order to calm the God of wind, Indra finally withdrew the effects of the Vajra he had made. At the same time, other gods also gave many boons to the child Hanuman. Although the impact of the Vajra left a never-ending symbol on Hanuman's chin.

Subsequently, when Hanuman came to know that Surya was very intelligent, he enlarged his body and placed it in Surya's class and requested Surya to accept him as his disciple. But Surya refused his request, saying that since he always travels on his chariot as his karma, Hanuman will not be able to learn effectively. Without getting distracted by Surya Dev's talk, Hanuman made his body bigger and put one foot on the eastern end and the other leg on the western end and again pleaded with Surya Dev and finally pleased with Hanuman's perseverance. He accepted his disciple.

Thereafter, Hanuman received his education by constantly traveling with Surya Dev. After completion of education, Hanuman requested Surya Dev to take Guru-Dakshina, but Surya Dev refused, saying that “The joy I have experienced in imparting education to a dedicated disciple like you is not less than any Guru-Dakshina”

But on the request of Hanuman again and again, Surya Dev ordered Hanuman to help Sugriva (Dharma Putra of Surya).

Hanumanji was very naughty in childhood, he used to harass saints with his nature. Often they used to snatch their worship material and many other things. Angered by their naughty nature, the sadhus gave them a small curse to forget their powers. Due to the effect of this curse, Hanuman temporarily forgot all his powers and recognize only after reminding by someone else. It is believed that if Hanuman were devoid of curse, then the appearance of Ram-Ravana war in the Ramayana would be different. Perhaps he himself would have ended the whole of Lanka including Ravana.
Share This Page On...