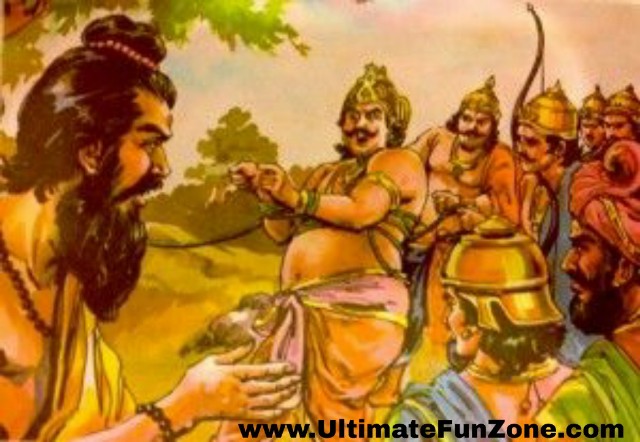 When the education of Pandava and Kaurava princes was completed, they wanted to give Guru Dakshina to Dronacharya. Dronacharya remembered his insult done by Drupada, and he said to the princes, “Princes! If you want to give Gurudakshina, then you should make Panchal Naresh Drupada a prisoner and present him to me. That will be your Gurudakshina.” On the saying of Gurudev like this, all the princes took their weapons and went towards Panchal country.

On reaching Panchal, Arjuna said to Dronacharya, “Gurudev! You first allow the Kauravas to fight with King Drupada. If they fail to arrest Drupada, we Pandava will fight.” On getting the permission of the Guru, the Kauravas under Duryodhana attacked Panchachal. There was a fierce war between the two sides, but in the end the Kauravas escaped and fled. Seeing the Kauravas fleeing, the Pandavas started the attack. Panchal Naresh's army was defeated in front of Bhimsen and Arjuna's might. Arjuna went ahead and made Drupada a prisoner and brought him to Guru Dronacharya.

Seeing Drupada as a prisoner, Dronacharya said, “O Drupada! Now I have become the lord of your kingdom. I came to you as your friend but you did not accept me as your friend. Now tell me that do you accept my friendship?” Drupada bowed his head with shame and apologized for his mistake and replied, “O Drona, it was a mistake for me not to accept you as a friend and for that I now have remorse in my heart. Both I and my kingdom are now subject to you, Now do whatever you want.”

Dronacharya said, “You said that friendship is between people of the same class. Therefore, I am returning half of your kingdom to you to maintain a friendly spirit.” Having said this, Dronacharya handed over the state of the southern bank of the Ganges to Drupada and kept the rest to himself.

Over time, Pandava studied many other disciplines. Bhimsen received the education of pillar-mace etc. considering Balarama as a Guru. By this time, Yudhishthira's virtues began to be admired nationwide. When the time came, Dhritarashtra placed the Yudhishthira as prince.
Share This Page On...
Home → Fun Zone → Stories → Mythological → Drona's Vengeance From Drupada