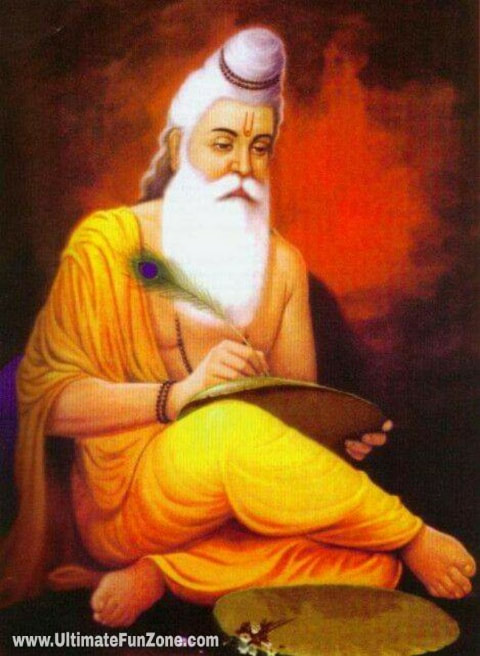 King Uparichar was a great majestic king. He was very devotional and very trustful. He pleased Devaraj Indra with his tenacity and obtained a plane and a beautiful never drying garland. He used to roam in the sky, wearing that garland, sitting on the plane. He was very fond of the game. He often went to the forest for hunting.

The queen of king Uparichar was named Girika. Girika was also very beautiful and pure-hearted. She loved her husband, was also highly believed to God. Valued to be constantly engaged in hymns and contemplation.

Once she was on period. When she was purified after three days, the Uparichar went for a hunt in the forest before he could do love with her. The king went for hunting, but kept his attention to love her queen.

It was noon. The king was sitting under an Ashoka tree in the forest. Cool and fragrant air was blowing. Birds were singing in soft voices. The king's attention shifted to the queen. He started thinking about loving her queen in his own heart. The king became salacious and his semen was ejaculated.

Pressing the leaf packaging in the beak, eagle flew towards the king's house. He was flying over the river Yamuna. Suddenly a second hawk caught sight of him. He thought, he is holding some food in his mouth. So, he attacked the eagle.

In both, fighting started. As a result, leaf packaging fell from eagle's beak into the water of Yamuna. Semen placed in leaf packaging was mixed with water. Fish thought it was a food item. So, she swallowed it with water.

As a result, the fish became pregnant. The boatman named Dasraj found her in the fish hunt. When he cut the belly of the fish from the center, a boy and a girl came out of his stomach. Dasraj presented both of them to the Uparichar. The Uparichar kept the child with him, but returned the girl to Dasraj. Dasraj took that girl to his home and started caring for her. Dasraj named the girl Satyavati. She was born from the stomach of the fish, so her body used to smell like fish. Therefore, people used to call him Matsyagandha as well. Matsyagandha grew slowly. She was very beautiful. She used to carry passengers on her boat and take them from this side to the other side. One day at noon, Maharishi Parashar reached there. They were fascinated by seeing Matsyagandha. He said to her, “Beautiful, you will be blessed with extraordinary happiness. I want to delight with you.” Matsyagandha replied, “Maharishi, what are you talking about? It is midday. People are sitting around. How can I have love with you?” Parashar ji created haze all around with yoga power. And replied, “Now no one will be able to see us. You can be sure and accept my proposal.” Matsyagandha spoke again, “Maharishi, I am a virgin. I am under the command of my father. My virginity will be destroyed by love with you. I will become stung in society.” Parashar ji replied, “Don't you worry. Your virginity will remain even after pleasing with me. Even if pregnant, the sign of pregnancy will not appear.” Matsyagandha then said, “One more thing, the smell of fish comes out of my body. You give me a boon that it turns into a fragrance and extends in all four ditections.” Parasharji accept her wish. As a result, the fragrance of musk started coming out of Matsyagandha's body. That fragrance used to spread in all four directions. Therefore, now she started being called Yojnagandha. Parasharji performed love with Matsyagandha. She became pregnant as a result of love with him. In time, a child was born from the womb on the island of Yamuna. That child grew up as soon as he was born, he went to the forest to do penance. The same boy became famous in the world as Ved Vyas ji. The full name of Ved Vyas ji was Krishna Dwaipayan Ved Vyas. He was of Shyam varna, hence his name Krishna. He was born between two islands, hence was called Dwaipayan. He called Ved Vyas because he was Vedas pandits. Ved Vyas ji is immortal, he still exists on earth and gives gratitude by giving darshan to some people.
Share This Page On...
Home → Fun Zone → Stories → Mythological → Birth Of Ved Vyas