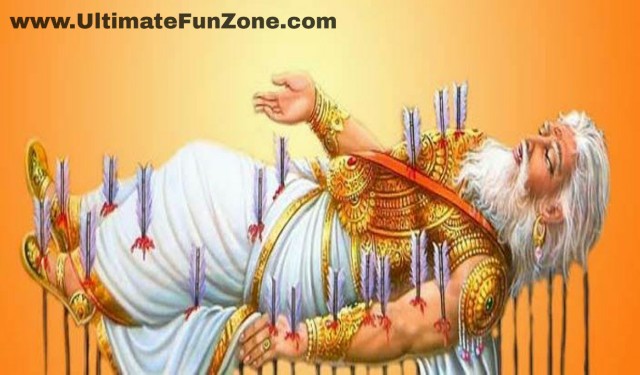 Once king Pratip of hastinapur was doing penance on the banks of the river Ganga. Fascinated by his beauty, Goddess Ganga sat on his right thigh. King was surprised to see this, then Ganga said, “O King! I am Ganga, daughter of sage Jahnu, (Ganga introduced herself as the daughter of the sage Jahnu while she was a Himalayan daughter) and have come to you with the desire to marry you.” On this king Pratip replied, “Ganga! You are sitting on my right thigh. The wife should be on the left side (Vamangi), the right thigh is the symbol of the son/daughter, so I accept you as my daughter-in-law.” On hearing this, Ganga went away.

Now king Pratip started doing intense penance to get a son. As a result of his tenacity, he received a son, whom he named Shantanu. When Shantanu was young, king Pratip went to heaven, ordering him to marry Ganga. To follow the father's order, Shantanu went to Ganga and requested him to marry him. Ganga said, “King, I can marry you, but you have to promise that you will not interfere in any of my work.” Shantanu got married as promised by Ganga and married him. King Shantanu had eight sons from Ganga's womb, out of which seven were taken away by Ganga to shed in the Ganga river and due to his promise, Maharaj Shantanu could not speak anything. When Ganga had an eighth son and she also took him to the river to shed, King Shantanu did not stay and he said, "Ganga! You have shed my seven sons in the river but according to your promise I did not say anything. Now you are going to shed this eighth son of mine too. I pray you, please do not shed him in the river.” On hearing this, Ganga said, “King! You have broken your vow, so I can not longer be with you.” After saying this, Ganga became disappear with her son. After that king Shantanu spent thirty-six years wearing a Brahmacharya fast. Then one day he went to the banks of the Ganga and said, “Ganga! Today I want to see the child whom you took with you.” Ganga appeared in the form of a beautiful woman with the child and said, “King! This is your son and his name is Devavrata, take him. He will be mighty as well as a scholar. In weaponry, he will happen like Parashurama.” King Shantanu was very happy to find his son Devavrata and brought him with him to Hastinapur and declared him as a prince.

One day king Shantanu was walking on the banks of Yamuna that he saw a beautiful girl riding a boat in the river. Smell was coming out of his body. Maharaj asked the girl, “Oh Goddess! Who are you?” The girl told, “King! My name is Satyavati, and I am a Nishad girl.” Maharaj regained her youth and immediately reached her father and proposed his marriage to Satyavati. Her father said, “King! I have no objection to my daughter marrying you, but you have to make only the son born of my daughter's womb the heir of your kingdom.” After listening to these words of Nishad, Maharaj Shantanu returned quietly to Hastinapur.

King Shantanu became distraught due to his separation with Satyavati. His body became weaker day by day. Seeing this condition of Maharaj, Devavrata got very worried. When he came to know the reason of this type of father's condition by the ministers, he immediately went to Nishad's house with all the ministers, and he said to Nishad, “O Nishad! You are happy to marry your daughter Satyavati with my father Shantanu. Please do it. I promise you that the child born from the womb of your daughter will be the heir to the kingdom. I do not take away the rights of your children, for this reason I promise that I will remain unmarried for a lifetime.” Listening to his promise, Nishad folded his hands and said, “Oh Devvrat! This promise of yours is unprecedented.” Having said this, Nishad immediately sent his daughter Satyavati along with Devavrata and his ministers to Hastinapur.

Devavrata brought his mother Satyavati and handed it over to her father Shantanu. The father was pleased and said to the son, “Son! You have pledged paternity, such as no one has done till date, nor will in the future. I give you a boon that you will die only by your will. Because of this kind of vows, you will be called Bhishma and your vows will always be known as Bhishma Vows.”
Share This Page On...
Home → Fun Zone → Stories → Mythological → Bhishma Vows