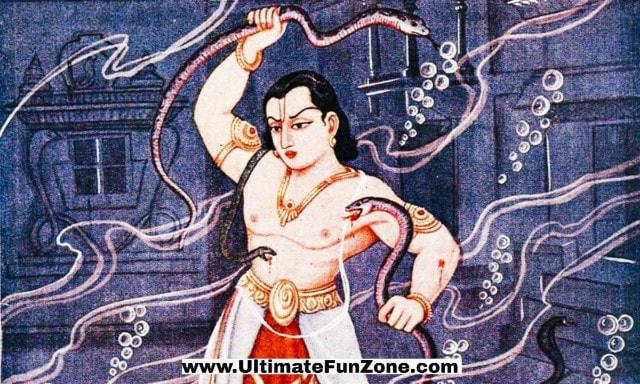 The five Pandavas - Yudhishthira, Bhima, Arjuna, Nakula and Sahadeva - grew up under the hand of Bhishma and Vidura. Bhima was the most powerful of those five Pandvas. He used to defeat ten or twenty boys easily. Although Duryodhana was jealous of the five Pandavas, but seeing this force of Bhima, he was very much jealous. He started thinking of a way to kill Bhimsen somehow. For this, he proposed to Yudhishthira one day to bathe, eat and play on the banks of the river Ganges, which Yudhishthira gladly accepted.

On the banks of the Ganges, Duryodhana prepared a wide variety of dishes. After bathing, when everyone had food, by taking the opportunity, Duryodhana fed Bhima with poisoned food. After the meal, all the children slept there. Bhima got fainted by the effects of poison. Duryodhana immersed the unconscious Bhima into the river Ganges. In the unconscious state, Bhima reached Naglok while drowning. There the fierce poisonous snake started biting him and the poison inside Bhima's body got destroyed due to the effect of poison on poison, and he came into consciousness. On his return to consciousness, he started killing the serpents, and one after one serpent started dying.

Seeing this destruction of Bhima, some snakes ran to their king Vasuki and apprised them of the whole incident. Nagraj Vasuki came to Bhima with his minister Aryak. Aryak snake recognized Bhima and introduced him to King Vasuki. Vasuki snake made Bhima his guest. There were eight such ponds in Naglok whose drinking water used to gain the strength of thousands of elephants in the human body. Nagraj Vasuki gifted Bhima the water of those eight pools. After drinking the water of ponds, Bhima went into deep sleep. When his sleep broke on the eighth day, thousands of elephants strength had arrived in his body. On asking Bhima's farewell, Nagraj Vasuki took him to his garden.

After waking up there, when the Pandavas did not see Bhima, they started searching for him and when he was not found, they returned to the palace. Mother Kunti became very distraught due to Bhima's disappearance in this way. She said to Vidur, “O Arya! Duryodhana is very jealous of my sons and especially Bhima. Is it that he brought Bhima to the dead?” In reply, Vidur replied, “O Devi! Do not be worried. According to Bhima's horoscope he has longevity and no one can kill him in his early age. He will surely return.” Thus, after getting the strength of thousands of elephants, Bhima returned to home.
Share This Page On...
Home → Fun Zone → Stories → Mythological → Bhima In Naglok