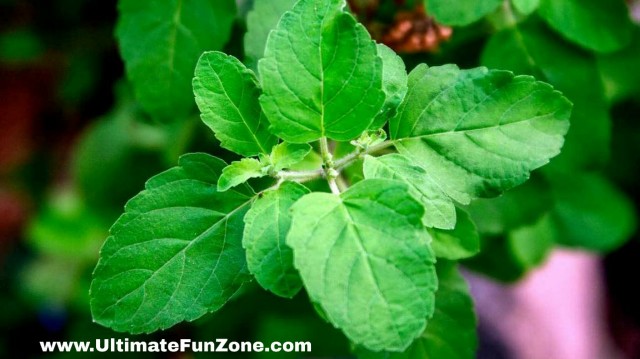 A story related to Tulsi is very popular. In the Shrimad Devi Bhagavata Purana, a divine leela tale of his incarnation has also been created. Once Shiva threw his light into the sea. A great boy was born to him. This boy later became the mighty monster king in the name of Jalandhar. The name of its capital was Jalandhar city.

Vrinda, the daughter of Daityaraja Kalnemi, was married to Jalandhar. Jalandhar was a mighty monster. Due to his power, he fought with the desire to get Maa Lakshmi, but due to originating from the sea, Maa Lakshmi accepted him as her brother. Defeated from there, he went to Mount Kailash, craving to find Devi Parvati.

He took the form of Lord Shiva and went near to Maa Parvati, but the Maa immediately recognized him with her yoga force and disappeared from there.

Devi Parvati got angry and narrated the entire episode to Lord Vishnu. Jalandhar's wife Vrinda was a very devoted woman. Jalandhar was neither killed nor defeated by the power of his wife's husbandry religion. That is why it was very important to dissolve Vrinda's husbandry religion in order to destroy Jalandhar.

That is why Lord Vishnu disguised as a sage and went to the forest, where Vrinda was traveling alone. The Lord was also accompanied by two elusive demons, upon which Vrinda became frightened. The sage devoured both of them in front of Vrinda. Seeing his power, Vrinda asked about her husband Jalandhar, who was at war with Mahadev on Mount Kailash.

The sage reveals two apes from his Maya trap. One monkey had Jalandhar's head in his hand and other monkey had torso in his hand. Seeing this condition of her husband, Vrinda fell faintly. Upon regaining consciousness, she begged the sage-god to resurrect her husband.

God again connected Jalandhar's head with his illusion, but he himself entered the same body. Vrinda had no idea of ​​this trick. Vrinda began to behave with devotion to the God who became Jalandhar, disrupting her husbandry religion. As soon as this happened, Vrinda's husband lost in the Jalandhar war.

When all the illusion came to know, she became angry and cursed Lord Vishnu to be rock, and she herself became sati. Where Vrinda was consumed, the tulsi plant grew. Lord Vishnu said to Vrinda, “O Vrinda. You have loved me more than Maa Lakshmi because of your husbandry religion. Now you will always be with me as Tulsi. Anyone who marries Tulsi with my Shaligram form will get immense fame in this world and the hereafter.”

In the house where Tulsi is there, even Yama's messengers cannot go untimely. Bathing in the waters of the Ganges and Narmada or worshiping Tulsi is considered equal. No matter how sinful a human being is, at the time of death, who is taken the tulsi and Ganga water in his mouth, he gets rid of sins and gets to Vaikunth Dham. A person who performs shraddh of his ancestors under the shadow of Tulsi and Aaval gets their ancestors salvation.

This land of the same monster Jalandhar is known as Jalandhar. The temple of Sati Vrinda is located in Mohalla Kot Kishanchand. It is said that there was an ancient cave at this place, which went straight to Haridwar. Worshiping the temple of Sati Vrinda Devi for 40 days with true mind fulfills all desires.
Share This Page On...
Home → Fun Zone → Stories → Mythological → Bhagwati Tulsi