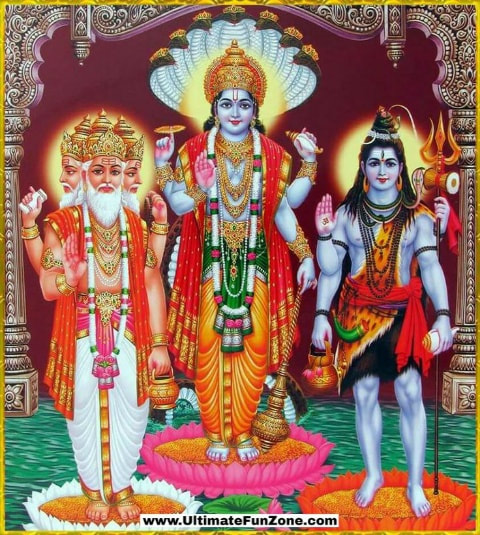 Maharishi Bhrigu was the son of Brahma. His wife's name was Khyati who was the daughter of Daksha. Maharishi Bhrigu is a sage of Saptarushi group. In Monsoon and Bhadrapada, they ride on the chariot of Lord Surya.

Once upon a time, on the banks of the river Saraswati, the sages gathered and were discussing the subject, who is the greatest and best among Brahma, Vishnu and Mahesh? Seeing no conclusion, he decided to take the examination of the trinity and appointed Maharishi Bhrigu, the son of Brahma, for this task.

Maharishi Bhrigu first went to Brahmaji. He neither saluted nor praised him. Looking at this, Brahma became angry. His face turned red due to excess of anger. Embers started burning in the eyes. But then, thinking that he was his son, he suppressed the impulse of anger that had risen in his heart.

Maharishi Bhrigu went to Kailash from there. Devadhidev Lord Mahadev saw that Bhrigu was coming, so he got up from his posture with happiness and spread the arms to embrace him. But to take his exam, Bhrigu Muni refused, rejecting his embrace and said “Mahadev! You always violate the dignity of Vedas and religion. The boon you give to the wicked and sinners brings a terrible crisis on the creation. Therefore, I will never embrace you.”

Hearing him, Lord Shiva became angry. As soon as he wished to lift the trident and kill him, in the same way, Bhagwati Sati kindly pacified him in some way.

After this Bhrigu Muni went to Vaikunth Lok. At that time Lord Vishnu was resting by lay head on the lap of Goddess Lakshmi.

Bhrigu gave a sharp kick to his chest as he went. Lord Vishnu soon got up from his posture and bowed down to him and caressed his feet and said, “God! Did not hurt your leg? Please rest on this posture. God! I did not know about your auspicious arrival. So, I could not welcome you. The touch of your feet is about to sanctify the pilgrimages. Today I am blessed with the touch of your feet.”

Seeing this behavior of Lord Vishnu, tears started flowing from the eyes of Maharishi Bhrigu. After that he returned to the sages and told all the experiences of Brahmaji, Shivji and Shrivishnu here in detail. All the sages were shocked after listening to their experiences and all their doubts were dispelled. From then on, he started worshiping Lord Vishnu as the best.

In fact, those sages had created such a leela not for themselves, but to erase the doubts of humans!
Share This Page On...
Home → Fun Zone → Stories → Mythological → Best Among Brahma, Vishnu, Mahesh