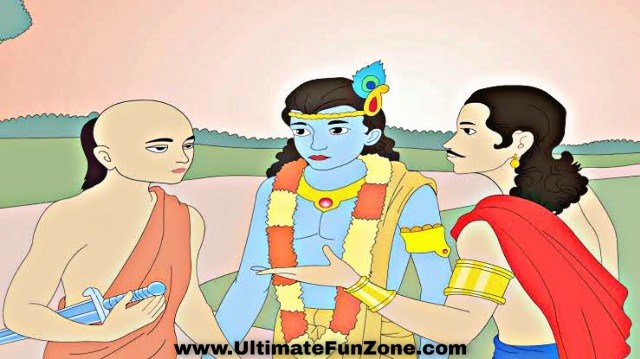 Once Arjuna got arrogance that he is the biggest devotee of God. Shri Krishna understood his particular sentiment. One day he took Arjuna to take him along. On the way they met a poor Brahman. His behavior was a little strange. He was eating hay, and a sword was hanging from his waist. Arjuna asked him, “You are a priest of non-violence. Creatures eat dry grass in fear of violence. But then why is this sword of violence with you? The Brahmin replied, “I want to punish some people.”

“Who are your enemies?” Arjuna expressed curiosity. The Brahmin said, “I am searching for four people, so that I can calculate my account from them.” First of all, I am looking for Narada. Narada does not allow my lord to rest, always keep him awake by doing bhajan-kirtan. Then I am also angry with Draupadi. He called my lord at that moment when he sat down to eat. They had to leave food immediately and save the Pandavas from the curse of Durvasa Rishi. Just look at his audacity. He fed my lord the eaten food.”

“Who is your third enemy?” Arjuna asked.

“He is the heartless Prahlada. The ruthless entrenched my lord in a cauldron of hot oil, crushed under the elephant's feet and finally forced to appear from the pillar. And the fourth enemy is Arjuna. Look at his wickedness. He made my God his own charioteer. He did not even notice the inconvenience of God. How much trouble my lord must have suffered.” As soon as he said this, the Brahmin had tears in his eyes. Arjuna's pride was crushed after seeing this. He apologized to Shri Krishna and said, “O Lord, I do not know how many devotees you have in this world. I am nothing compared to them.”
Share This Page On...
Home → Fun Zone → Stories → Mythological → Arjuna's Ego