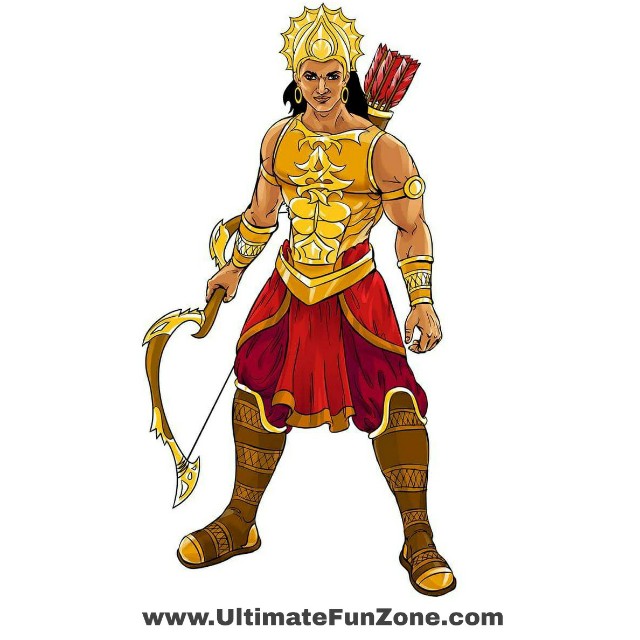 Arjuna had dedicated himself to Shri Krishna. Even though Arjuna was not there, not because he did what he did, not as Arjuna, but as a servant of Shri Krishna. The servant's concern becomes the owner's concern.

Arjuna's war with his own son Babruvahana, who beheaded Arjuna... and Krishna came rushing for the soul of his beloved friend and devotee who was in trouble.

The horse of Ashwamegha Yagya was caught by Babruvahana and the responsibility of taking care of the horse was on Arjun. Babruvahana promised his mother Chitrangada that I would defeat Arjuna in battle because Arjuna did not return after marrying Chitrangada. And meanwhile Chitrangada gave birth to Babruvahana.

Chitrangada was angry with Arjuna and had told his son that you had to defeat Arjuna but did not tell that Arjuna is your father and Babruvahana grew up in his mind to defeat Arjuna. He learned weapons, also received divine arrows from Kamakhya Devi, to slay Arjuna.

And now Babruvahana captured Ashwamegha's horse, then the battle with Arjuna became. Babruvahana made Bhima unconscious. And then there was a fierce battle between Arjuna and Babruvahana. When he seemed impossible to defeat Arjuna, Babruvahana severed the head of Arjuna using the divine arrow received from Kamakhya Devi.

Shri Krishna knew what would happen, and what Krishna knew, it happened. They came running away from Dwarka. He told Dau, “If it is late, it will be too late, I am going.”

Kunti started crying, brothers started crying. Arjuna was the force of the Pandavas, the base of pandavas. But when Arjun is not there, then what is the benefit of living?

Goddess Ganga came and said to Kunti, “What is the benefit of crying, Arjuna has got the fruits of his karma. You know, Arjuna killed my son Bhishma, deceitfully. He considered Arjuna as his son. He used to give love, but Arjuna, under the guise of Shikhandi, had put my son to sleep on the bed of arrows. Why? Bhishma had laid down his arms. He could not shoot arrows on the shikhandi. He was pledged, but Arjuna still shattered my son's chest with arrows. You probably don't remember, but I remember well. Then I cried a lot. Now Arjuna is beheaded. The arrow from which Babruvahana have beheaded, I gave it through Kamakhya Devi.

It was difficult for Babruvahan to defeat Arjuna, after all he used my arrow and I took my vengeance. Why do you cry now? Arjuna killed my son and now his son has killed him, now what is the benefit of crying? He got what he did. I took my vengeance.”

Lord Krishna heard the word vengeance. Surprised and watch Arjun was beheaded and Ganga Maiya, Bhishma's mother, is telling Arjuna's beheading to be the fulfillment of his vengeance. Shri Krishna could not bear this. He saw Arjuna's body, Bua Kunti, Pandu's sons. Also saw Babruvahana and Chitrangada then said, “Ganga maiya, to whom are you talking vengeance? Bua Kunti, Arjuna, or a mother? Mother never retaliated with mother Can take. Mother's heart is the same, be it Arjuna's mother or Bhishma's mother. Which mother have you retaliated with?” Ganga said, “Vasudeva! Arjuna killed my son when he was unarmed, was it fair? I also killed Arjuna with his son. Did I do wrong? My vengeance was complete Happened. This is the vengeance of a mother.”

Shri Krishna explained, “The situation in which Arjuna killed Bhishma was also told by the Bhishma to Arjuna because if the Bhishma was in a war, Arjuna's victory was impossible and the path to withdraw from the war was the Bhishma himself. He had told, but the situation is different here. Arjuna has stopped the attacks of Babruvahana, did not attack on Babruvahana, and if Arjuna wanted this, could it not have happened? Arjun has increased your value, by taking revenge of your own arrow given by Kamakhya Devi, you have not done good to your son Bhishma.”

Ganga was confused. She has no any answer of the arguments of Shri Krishna. Asked, “What should be done, what was to be done is done. Only you can suggest the way now.”

Ganga understood it and mother Ganga suggested a way to connect Arjuna's body with his head. This was wonderful of Krishna's arguments. The one who has the blessings of Shri Krishna, who has entrusted himself to Shri Krishna, has given his worries, has given his life, has surrendered himself, Shri Krishna comes without calling to protect him.

On walking from Dwarika, Dau said, “Kanha, now there is a war between Arjun and his son, not with the Kauravas, then why are you going?” So, Krishna had said, “Dau, Arjuna does not know that the one he is fighting with is his son. So, it will be a disaster. And I cannot leave Arjuna alone.” Such is the relationship between God and the devotee. There is no distance between them. And when the life of the devotee is in trouble, God cannot sit silent.

Arjuna should have all sensed, and Krishna should stay away. This cannot happen. Remember, no one can save whom Shri Krishna wants to kill, and whom he wants to save, no one can kill him. Arjuna and Shri Krishna are one, Nar and Narayana.
Share This Page On...